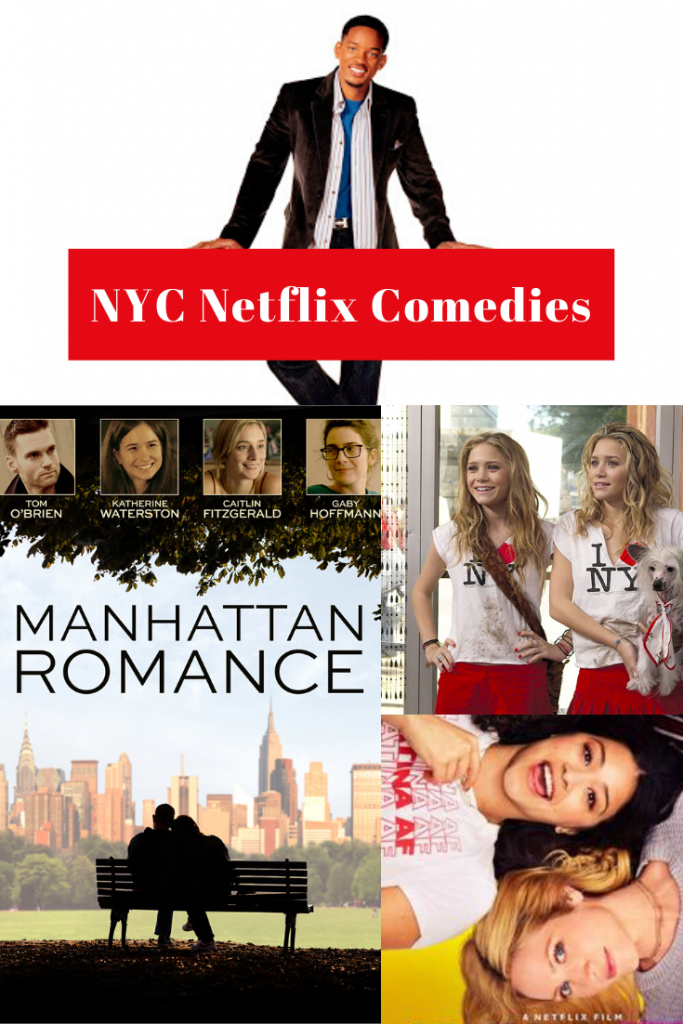 I may have just spent 5 days straight in my PJs watching Netflix coping, but also doing this very important research and found these feel-good comedies that made me laugh set in New York City. New York is often a big screen backdrop, but while some movies might only have a quick stock clip of NYC, the following comedies, because yes laughter is the best medicine, will distract and transport you to New York virtually. This list something for everyone, from throwbacks to animations and even the holidays, you will find a movie that matches your mood. Which one did we miss or which one is your favorite? Comment below!

This 2005 romcom follows Hitch as he can help his clients find love, but he cannot seem to keep his cool in his own dating life. From jet-skiing to Ellis Island to the Metropolitan Museum of Art steps, NYC plays a main role in this funny flick.

2. The Other Guys: NYC locations

If you’re looking for a laugh these NYPD cops cause havoc as they channel Grand Theft Auto in the streets of NYC. Iconic locations include the Plaza hotel, Peter McManus where Will Farrell sings an Irish song, Madison Square Garden, the bull in the financial district and the rich apartment is actually Top of the Rock in Rockefeller.

3. Spider-Man Into the spider-verse: NYC locations

This animated action film follows a new Brooklyn character who is bitten by a radioactive spider in what looks like the old abandoned City Hall subway station. You don’t have to be a Marvel fan to appreciate this beautiful comic book inspired animated world. Swing through the streets and jump across buildings to see a totally new perspective of New York.

This technically is not a movie but a comedy special that follows Colin through an off-Broadway performance about the history of the people New York. The set and jokes will prepare you for a visit surrounded by crazy New Yorkers or strike a few chords with many locals.

5. Set it up: NYC locations

This fun Parent Trap style double love story follows two assistants as they set up their workaholic bosses. From a Yankees game to the High Line to NYC rooftops framed by water towers, this movie has some great NYC scenery.

Throw it back to this 2004 classic with Mary-Kate and Ashley Olsen. With a name like New York Minute, there are endless iconic scenes and moments like a sign at about 25 minutes that says, “Leaving Brooklyn: Fugheddaboutdit” and the twins wandering around in I love NY attire. Backdrops include the Flatiron building, Brooklyn Bridge, Times Square, The Plaza and Columbia.

While making a documentary on love in NYC, a guy figures out his own love issues. NYC locations include the High Line, DUMBO and Washington Square Park.

This is a cute but unexpected love story that centers around delivering a briefcase for someone on a train platform. It starts in Danny’s Polish home in Astoria, Queens and follows the main couple to complete their task around the city.

9. Sleeping with Other People: NYC locations

After meeting and hooking-up at Columbia, two serial philanderers help each other find love. NYC locations include Pastai, Pianos and Le Monde.

This Christmas-themed trilogy begins and ends in New York as a commoner falls in love with a prince. It has all the cheesy NYC holiday vibes before whisking you away to a real winter wonderland filmed in Romania. Who says you can only watch holiday movies once a year?!

Someone Great follows Jenny, a music journalist, just after an unexpected breakup that will make you grateful for good friends. When she first deals with the breakup she’s on a bench in the subway at President Street in Brooklyn bonding in a hilarious scene with a stranger until they say, “I’m kinda over this conversation to be honest” in true New York fashion. The main actions of the movie take place in Sony Hall NYC and in Washington Square Park in front of the arch and the ending scene kicks off with the song Moon River from Breakfast at Tiffany’s.

What is your favorite Netflix comedy that takes place in NYC? Comment below!