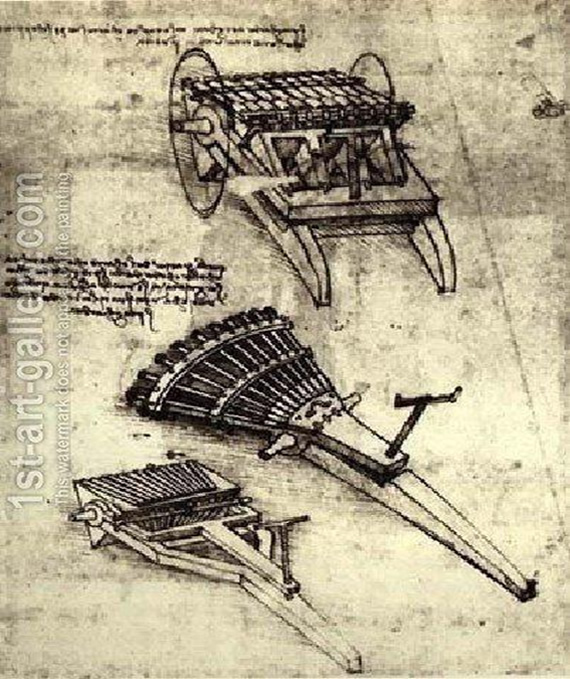 Art is often seen as an abstract domain, far (and sometimes contradictory) from logic-fed fields like science. However, many world-renowned artists who crowned history with their art have also made ground-breaking contributions to civilization with their visionary inventions. Leonardo Da Vinci, also known as the ‘Renaissance Man’, is one such name.

When you hear the name of this 16th-century virtuoso, your immediate thought must be of works like Mona Lisa and Last Supper. But there was much more to Da Vinci’s art which stirred the scientific world quite a lot. His vision was way ahead of his times which enabled him to create, at least on paper, inventions that were revolutionary to mankind. Artists are often considered sensitive souls, but Da Vinci was surprisingly very involved in contemporary military technologies and warfare. One particular problem that he identified during his times was the time taken to reload cannons, which created a significant lag between two rounds of fire.

He thought of multi-barreled cannon that rotated so that a line of shots could be fired, as the previous shot cannons reloaded simultaneously. Devising a structure of such a complex machine on paper was a feat that almost seemed impossible during those times. This barreled cannon can be taken as the most primitive form of a present-day machine gun.

Another remarkable military contraption that Da Vinci designed was an armored tank. It included a manually powered carriage covered in metal sheets and having small slits through which soldiers could fire rifles. Very few know that Da Vinci was the first to be credited with the designs of a flying machine. The artist studied several discoveries made during the dissection of bird wings and incorporated them into his creation of a winged device called Ornithopter.

This first-of-its-kind flying machine (on paper) had a light pinewood frame with two gigantic extending wings. The core frame was draped in silk to give it a feathery look, and the wingspan went up to 33 feet to provide good propulsion. These wings were powered and controlled by a rod-and-pulley system which was pedaled by the pilot.

As for direction, the machine could be steered by the pilot using a headpiece. There were many flaws in the design, like the lack of engine mechanism, but it was a remarkable development in aeronautics nonetheless.

Another marvelous invention of Leonardo was a self-propelled card that also formed the basis for modern-day four-wheelers. One unique feature of this cart was the pre-programmable steering system which gave it a ‘robotic’ touch.

The cart was powered by coiled springs, and it also had a braking system in place. It was later reimagined by scientists at the Institute and Museum of the History of Science in Italy. Researchers also asserted that the furnished vehicle made from initial sketches of Da Vinci resembled the Mars Rover. Interestingly, the cart was originally designed to be used as a theatrical prop in Leonardo’s time.

Leonardo wasn’t the first to ideate a diving suit; however, his designs were indeed the most advanced and clever for his time. Conceived as a weapon against invading ships, Leonardo designed the suit made entirely of leather. It was a full-body combination of pants, jacket, and face mask consisting of a cane and steel rings to resist water pressure.

Air was stored in the front bulge of the suit and had tubes attached to the mask to allow breathing. The suit also had many pockets for storing necessary tools and a urine collection compartment as well. Although the design had many loopholes, it was very well conceptualized and formed the basis of future inventions.

The first Parachute was made in 1783; however, important evidence collected from Leonardo’s work indicates that the artist had already ideated a parachute some 500 years ago. Da Vinci annotated one of his sketches with the theory that if a man has linen cloth held open by wooden poles, he can jump from any altitude without getting hurt.

However, due to the technological limitations of his time, this parachute design was never tested until 2000, when Adrian Nichols successfully built a parachute based on this design. It was another useful military contraption that Da Vinci designed in the late 15th century for Duke Sforza. The revolving bridge is an example of flat-pack design and allowed soldiers to cross rivers easily and quickly. It was a transportable device that could be packed up and carried anywhere.

The bridge had counterweight tanks on both sides that would help in balancing the structure. Coming to its transportation, it consisted of wheels and a rope-and-pulley system that allowed easy deployment in a short time. The device was truly a marvel in its time and a benchmark innovation in warfare.

Studying the engineering marvels designed by Da Vinci will help you better understand the potential of this gifted artist. While you can’t admire his inventions in form, you can always gush over his articulate designs reproduced by the finest artists at the 1st Art Gallery who have painted Da Vinci inventions. It will help you gain a fresh perspective on the much-debated relationship between art and science.