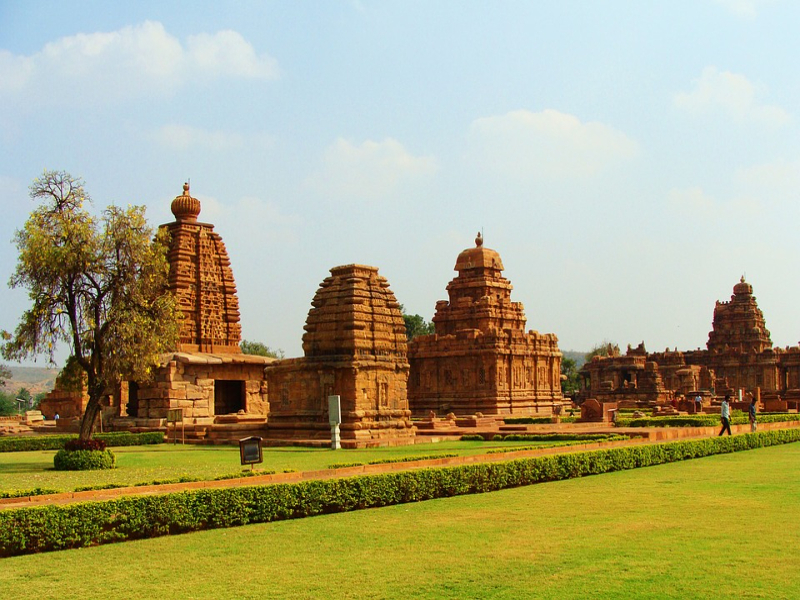 As you approach Hampi, the erstwhile capital of the 14th century Vijaynagara Empire, you will find yourself drawn in two directions. Here the ancient and the prehistoric vie for your attention.

The set of ruins which are a UNESCO World Heritage Site, intersperse precariously among granite rocks that are easily three billion years old!

Hampi is nothing short of a work of art with its sky-high boulder mountains and lush paddy fields providing a perfect backdrop to the architectural marvels that Vijanagara’s artisans have created.

While natural weathering has lent a distinct bulbous look to the rocks here, many of the carved architectural masterpieces have stood the test of time.

The historic centre of Hampi, which embosoms most of the ruins is best explored on a two-wheeler – mopeds or bicycles. Though autorickshaws are also a good option if you are short on time and want to escape the sun, which is very harsh throughout the day.

After all, the sheer magnitude and expanse of the ruins of temples, palaces, markets and royal enclosures will leave you gasping, quite literally.

While most temples are in ruins and not operational, the Virupaksha Temple – dating back to the 7th century, is still active and has become a symbol of Hampi.

The Stone Chariot is another iconic symbol of Hampi that sits firmly within the Vittala Temple complex. The sprawling complex is adorned with exquisitely carved pillars that support the main temple and pavilions around it.

These pillars have a unique feature of producing musical notes when struck – a brilliance of Vijanagara’s artisans we are yet to decipher.

In its heydays, Hampi was not only a trading hub but also a vibrant capital that was helmed by patrons of arts and music. On the one hand, the Hampi bazaar ruins with its beautifully carved two-storied pavilions lined on both sides of the kilometre-long stretch attest to its trading prowess.

On the other, the House of Victory within the Royal Centre is believed to have witnessed many victory celebrations accompanied by dance and music.

The artistic freedom enjoyed in the Vijayanagar kingdom is on display in many of its monuments like the Lotus Mahal (located inside the Zenana) that incorporates Rajput-style arches, making them must-visit places in Hampi.

Then there are the Indo-Islamic influenced structures that were used as the Elephant’s stables. The Hazara Rama temple for instance depicts the Ramayana frieze.

After all, the monument hopping in Hampi a quick hop across the Tungabhadra river to the northern bank brings you to Anegundi. A sleepy village today, it was once a thriving capital founded around the 10th century and is thus older than Hampi.

Getting to Anegundi via a coracle is an adventure in itself but what remains after the visit are the vestiges of its glorious past.

While the Vijaynagara era monuments like the Gagan Mahal and Durga temple offer a brush with history, mythology is what rules the roost here. Sugriva’s cave is a case in point. A natural cave believed to belong to the mythical monkey warrior Sugriva it offers a picturesque setting located next to a tranquil water body.

However, there is no better place to absorb the magic of the landscape than atop the Anjaneya hill that affords a birds-eye view of the boulder-strewn landscape which is best witnessed at sunrise. Among the unmissable places to visit in Hampi, the hill is believed to be the birthplace of Lord Hanuman and Anegundi the mythical kingdom of Kishkinda.

At a distance of 15km from Hampi is the Daroji Sloth Bear Sanctuary – a unique experience amid all the history that surrounds the region. The watchtower here offers a good vantage point to observe these animals in their natural habitat. The honey-loving population of sloth bears is best viewed during the afternoon. Don’t forget your binoculars though!

Another offbeat experience in Hampi is a visit to KRSMA winery and vineyard, located around 70Kms north of the city. A pleasant half-day trip from Hampi, it offers vinery tours with wine tastings and meals that complement them and the setting.

Pattadakal, Badami and Aihole lie north of Hampi – a trio that predates Hampi’s ruins and, according to several archaeologists, is the birthplace of various architectural techniques that were perfected and used for Hampi’s monuments.

Built-in the 7th – 8th centuries by the Cholas, the cluster of temples in Pattadakal, a UNESCO listed heritage site, offers enough material to complete a doctorate in temple architecture. It is also one of the few places tourists who only stay in Hampi and don’t venture around it, tend to miss out.

With a majority of temples dedicated to Lord Shiva, it is a unique amalgamation of North and South Indian styles of architecture that features tales from mythology, inscriptions of donors, kings, and artists, as well as sculptures depicting human figures.

Close by in the town of Aihole the Ravana Phadi Temple is a 6th-century rock-cut cave temple that houses the Ardhanarishwara – the half male and half female form of Lord Shiva. Don’t forget to look up once you are inside the temple as it is home to a well-preserved rock painting, making it an essential stop during a holiday in Hampi.

Of the 120 temples in Aihole, the most prominent however is the Durga Temple. Interestingly it derives its name not from the goddess Durga but owing to its proximity to the durg (fort)!

An hour’s drive from Aihole, surrounding the picturesque lake Agastya, the temple complex at Badami has four imposing 6th-century cave temples that ascend to several hundred feet. A designated UNESCO World Heritage Site near Hampi, these caves are stunning examples of the Chalukya era architecture giving us glimpses into their glorious past.

The first cave is dedicated to Lord Shiva with sculptures depicting his Tandava dance, Ardhanarishwara form, and with his family – Parvati, Ganesh, and Kartikeya. The next two caves are dedicated to Lord Vishnu.

Among them, the most captivating is a sculpture of him in his Trivikarma form.  The fourth cave is strikingly different from the others and is a representation of Jain Tirthankaras.

A journey around Hampi is, therefore, an eclectic mix of experiences that leaves one with memories that would last a lifetime.