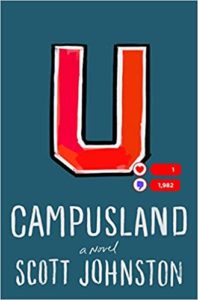 I rarely read a whole 300+ page novel in a day, but I did so on Saturday. It’s Campusland by Scott Johnston. Johnston, who worked at Salomon and opened some nightclubs in New York, also founded two tech start-ups. But those are not what the book’s about. It’s about Ephraim Russell, a young assistant professor of American literature who teaches at fictitious Devon University, a small elite private university with a multi-billion dollar endowment. Russell is up for tenure but, while trying to teach Adventures of Huckleberry Finn, gets caught in the buzzsaw of phony charges of racism. Later he gets charged with coming on sexually to a precocious 18-year old freshman (excuse me, I shouldn’t have said “man:” I mean “first-year.)

There are so many things to like about the book. It took about 40 pages for me to get into it but once I was, I wanted to know what happens. Even though much of what transpires seems overdone, one can believe that this kind of thing can happen in a Title IX, “Dear Colleague” universe. If you don’t know what I’m referring to, look it up or, better yet, read the book.

Johnston is quite good at examining the motives and incentives of the various players who try to get Professor Russell in hot water. Each motivation seems plausible.

One passage in particular is worth reporting in an economics blog, the unintended, but believable, consequences of changes in laws, in particular the law on drinking. One of Ronald Reagan’s worst domestic policy mess-ups was his signing a federal law to raise the drinking age to 21. (It doesn’t compare with his ratcheting up of the war on drugs but it’s pretty bad.) The stick Reagan and Congress used for states that didn’t comply was a threat to withhold highway funds.

Johnston doesn’t mention Reagan but he does lay out some unintended consequences of the law. Here are a few.

Despite determined efforts over many decades by Devon administrators, fraternities remained a part of the school ecosystem. There was a time, back in the 1970s, when the administrators had almost succeeded in purging them, but then the drinking age was raised to twenty-one and off-campus fraternities sprouted like invasive weeds.

Effect on Size of Parties and Type of Alcohol Consumed

But big, campus-wide parties? Those were now a thing of the past. Students slithered into the nook and crannies, mainly dorm rooms and fraternities, consuming what they wanted behind closed doors where they wouldn’t be caught by RAs and other mandated busybodies. Beer, the college beverage of choice since the first student was forced to read Proust, faded away. Too bulky. No way to sneak a keg into your dorm. Vodka was the new poison, its primary virtue lying in its efficiency–a mere ounce was equivalent to a whole beer, so it was easy to sneak around, and it mixed with about anything.

Notice the solid economic reasoning above about the effect of illegalization on risk and therefore on relative prices.

Effect on Mixing of Demographic Groups

There were other, subtler consequences. Unintended ones. Social life became cliquey, balkanized. With the open-to-all, campus-wide parties gone, students now huddled in groups of six or ten or twelve. These groups had an irritating habit, from a progressive college administrators point of view, of self-selecting almost completely along demographic lines.