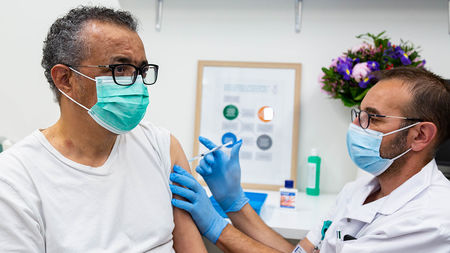 Science’s COVID-19 reporting is supported by the Heising-Simons Foundation.

GENEVA—Few have spoken out as forcefully against the global disparity in COVID-19 vaccine distribution as Tedros Adhanom Ghebreyesus, director-general of the World Health Organization (WHO). Tedros, as he prefers to be called, has labeled the inequity “vaccine apartheid” and a “catastrophic moral failure” that has led to a “two-track pandemic.”

Tedros has seen such moral failure before. As Ethiopia’s minister of health between 2005 and 2012, he witnessed firsthand how lifesaving HIV drugs were slow to reach infected people in sub-Saharan Africa. To prevent a repeat with COVID-19, WHO and other parties launched the Access to COVID-19 Tools Accelerator, a collaboration meant to speed development of medicines and diagnostics to slow the pandemic, and COVID-19 Vaccines Global Access (COVAX) Facility, a global procurement scheme for vaccines. But so far, they have not had much impact.

Science spoke to Tedros on 12 June at WHO’s headquarters, which is still largely deserted because of COVID-19, a few hours before he would address the summit of G7 nations underway in the United Kingdom. The interview has been edited for brevity and clarity.

Q: I want to read you something. “Advocacy, urgency, a sense of optimism that it could be done, and political commitment matched by adequate resources provided the foundation for HIV scale-up.” Do you know who wrote that?

A: That must be you.

Q: Me? You. That’s an article you wrote with Kevin De Cock and Wafaa El-Sadr 10 years ago about expanding access to HIV treatment. You were a minister of health.

A: We were saying the same thing, many of us.

Q: You’ve made arguments about unequal access to medicines for years. With COVID-19, the conversation about inequity started before there was something that worked. You were trying to get ahead of it, by doing the advocacy early?

A: When I was minister of health, I saw two global failures. One is HIV. Those who needed [antiretroviral drugs] in low-income countries didn’t get it until 10 years after the discovery. That’s very, very disappointing. I remember how happy I was when we started the first 900 treatments [in Ethiopia]. Ultimately, the coverage increased. But still, those 10 years were really unacceptable. Not only that, there was an H1N1 influenza pandemic [in 2009]. Vaccines were developed, but they didn’t reach low-income countries, especially in Africa.

These are the things I remembered when we were confronted with COVID. And from the start, we were saying: We shouldn’t repeat the same mistake. That’s why the idea of this accelerator came, and COVAX. It’s unprecedented actually to have eight vaccines [authorized] in just a year. But where we’re failing is the vaccine equity for distribution.

A: I don’t think I know the answer.

Q: Has anyone become very ill or even died from COVID-19 who was close to you?

A: Yes. The closest is the stepmother of my wife. And this is before vaccination started, and even now she probably wouldn’t have had access. She died. And there are others, a bit more at a distance.

Q: Operation Warp Speed set out with a goal to vaccinate Americans and a target of 300 million doses very early. It wasn’t designed to vaccinate the world. It was designed so that President Donald Trump would deliver for the American people and protect the country. What if there had been a different administration that had a more global vision?

A: The problem of just focusing on one country is we will not use the full potential of the whole world.I would turn to the G7 first, and they’re here. I would take G20, which controls 80% of the GDP [gross domestic product]. They can influence the whole world. What we have been saying from the start—solidarity, everybody contributes to the basket.

Q: What do you think of the Biden administration?

A: This person has changed everything, turned it upside down. It’s day and night what happened. From day one, when Biden reversed the decision [by the Trump administration to defund] the WHO, he has shown his commitment. And the U.S. has made the largest contribution to donating vaccine doses. We appreciate the help and hope other leaders will follow suit and make a significant contribution. We cannot ask the U.S. to do it alone.

Q: You’ve been talking recently about the idea of a pandemic treaty. What’s the essence of that idea, and how would that have affected us today if it existed?

A: One of the challenges we have been facing is sharing. Sharing information, sharing data, and sharing pathogens or biological material. Sharing technology, like what you see now with vaccines. Another problem is global coordination. If we had a treaty, the impact of all these challenges could have been addressed or minimized, especially if it’s binding. We need to have a framework that really tells the world, all players, what to do.

Q: Is part of this treaty idea that it would be binding with regard to waivers of intellectual property (IP) for vaccines and other medicines?

I’m a strong supporter of IP. I’m very grateful to the private sector. And I don’t believe in just taking IP away from them. I actually proposed giving incentives, some compensations [in exchange for an IP waiver]. At the same time, the companies also have a social responsibility. This is about the whole world. Who would like the world to be hostage of a virus? Companies can make [a] profit on 99% of their medicines. This is 1% of things.

Q: You tried to launch an IP sharing program called the COVID-19 Technology Access Pool. Are you surprised that no vaccine companies participated?

A: It’s a mixed feeling: surprised, not surprised. Social responsibility is just something you would expect from a decent human being when the whole world is burning.

Q: I imagine you have been on the phone with leaders of vaccine companies and you’ve said what you just said to me to them. Am I right?

A: You’re right. I encourage them to help. It’s the same response, the same argument: Even if we transfer the technology, there is this problem, multiple owners of the different patents, all that.

Q: COVAX initially had a target of vaccinating 20% of the world population by the end of this year. But the African Union wanted to aim for 60%. What do you think of that?

A: When COVAX says 20%, it doesn’t mean that Africa or any individual country can’t do more. You can take 20% as COVAX’s contribution. And then Africa can use other options. COVAX is the base, the bottom line, and then continents or regions or countries can have their own targets.

Q: You’ve been criticized for WHO’s relationship with China. But there’s often little understanding of what kind of power you really have. Because you’re representing member states, your hands are always going to be tied at some level. There’s only so much you can do with any country to have them open up or be transparent or contribute. I’m curious whether anything could have happened differently with China?

A: Being a member state organization doesn’t mean we just do whatever the member states ask us. For instance, the problem between WHO and the former U.S. administration was that we said no to something. No is no because it’s not the right thing to do.

Q: What was it that you said no to?

A: I don’t think I need to go to that specific detail. But it was something that this organization should not do. And we said, “No.”

Q: You said no to the Trump administration.

A: Exactly. And that was the problem. Then we were being blamed for not being independent. But if we’re saying no to unfair requests and questions, that’s independence.

So if you take China, and the origin study, we explained what the challenges are, especially that there wasn’t enough cooperation with raw data, especially during the early days, and we pressed them. At the same time, because of the not-well-developed assessment of the lab hypothesis, we said, “All hypotheses are open.” If there is an issue that WHO should really say straight, we say it.

Q: But you’ve been heavily criticized for a report that came from WHO, with its imprimatur, saying the lab hypothesis is extremely unlikely.

A: That’s where there is a misunderstanding. The group came from different institutions and different countries, and they’re independent. There were only two WHO staff who joined them. They came up with their study. At the end of the day, we said: “OK, there is progress, but there are these challenges.” And we said it openly. We treated China the same way we treat every country.

Q: When SARS-CoV-3 shows up or H17N28 or HIV-3, whatever it is, and you’re sitting where you’re sitting now, what are you going to do differently on day one?

A: If you’re asking for a magic bullet, there’s no magic bullet. I appointed a very independent, high-level commission to assess the situation so far and make recommendations. They did a very impartial independent assessment, which we are really proud of. We have to calm down and chart a clear road map on how to respond to the next pandemic. But we have to be very, very serious in learning from this and do things that are as ambitious as possible, and that will be impactful. And I hope the world together will take those recommendations seriously and identify areas that we can address to prevent the next pandemic or to detect it early and manage and minimize the impact.

Q: I want to ask you about your own vaccination. What was the date you got your first shot?

A: I feel like I know where I belong: in a poor country called Ethiopia, in a poor continent, Africa. With the privileges I have here, maybe I had a chance to have it first. I don’t want to use that, because I want to be reminded every day that vaccination should start in Africa. I wanted to wait until Africa and other countries in other regions, low-income countries, started vaccination.

I have a background as a health worker and I’m in one of the risk groups. They were beginning to vaccinate health workers and risk groups [in Africa] around that time, so I thought that was my turn. I was checking my turn, actually, compared to what I would have in Africa, not in Geneva. I was protesting.

Q: Which vaccine did you receive?

Q: How did it feel once you got vaccinated?

A: I’m still feeling that we’re failing. I was having my shot with disappointment.