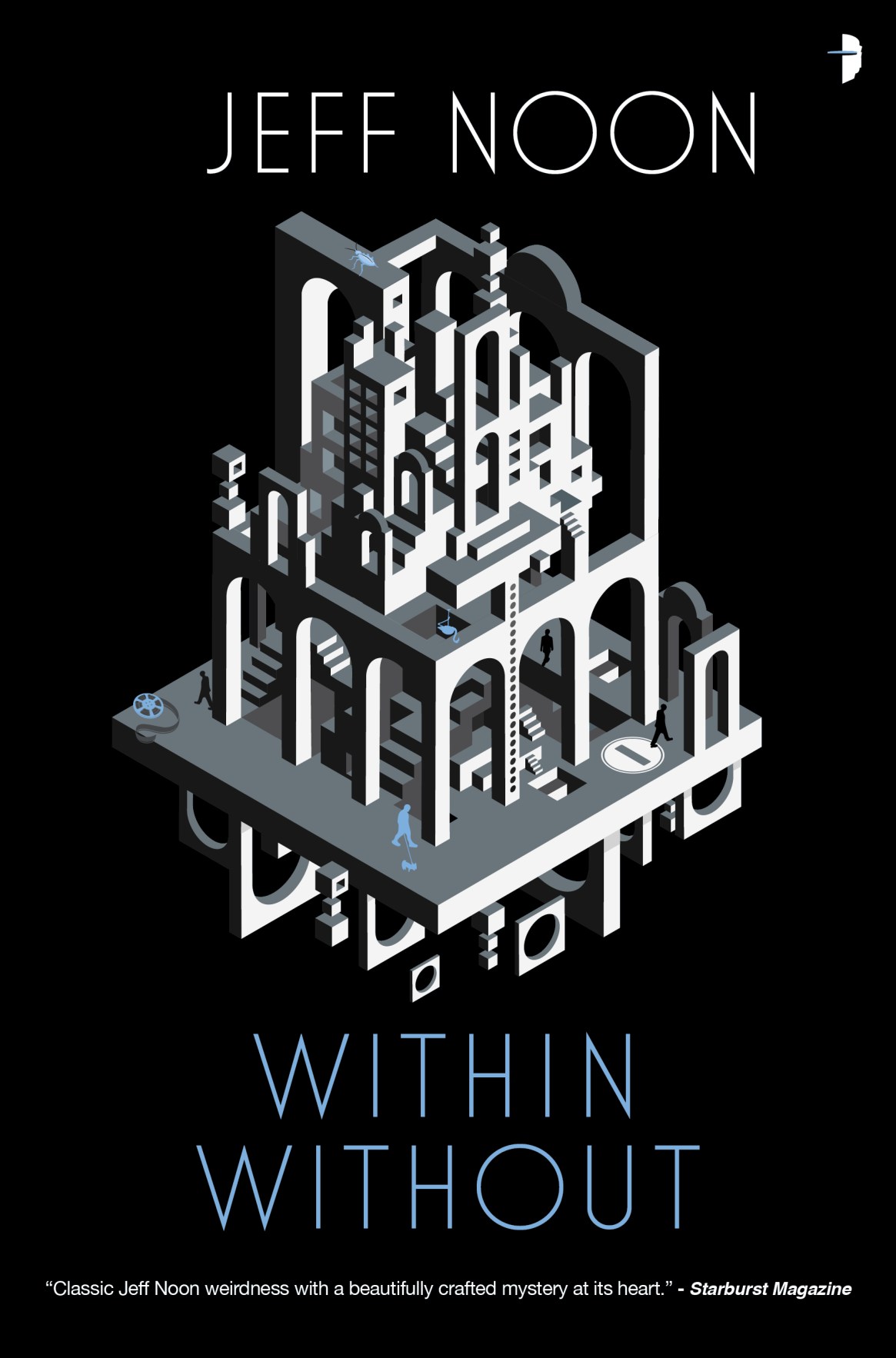 In the year 1960, private eye John Nyquist arrives in Delirium, a city of a million borders, to pursue his strangest case yet: tracking down Oberon, the stolen, sentient image of faded film star Vince Craven.

As Nyquist tracks Oberon through a series of ever-stranger and more surreal borders, he hears tantalizing stories of the Yeald, a First Wall hidden at Delirium’s heart. But to get the help he needs to find it, he’ll have to journey into the fractured minds of the city’s residents, and even into his own…

TERMINUS WAS THE ROMAN GOD OF BORDERS

Within Without takes place in Delirium, a city famous for containing more than a million borders. The exact number is disputed. The borders are constructed from many different materials: wood, stone, paper, wire, people, ideas, magical spells. Some of them, a few, are permanent, many others are temporary, perhaps lasting for a day, or even for ten minutes only. Some borders are official, planned and created by the city council, but most are made by the citizens themselves, for their own pleasure and purpose. For the residents of Delirium love to build borders, they love to queue at borders and pass through borders, and then knock them down, and build them again in a different place. The whole city becomes an ever-shifting maze, dissolving and reforming itself anew as each moment passes. Private investigator John Nyquist arrives in this city, a stranger to its values, and its true nature. He hopes to take on a case, and solve it; yet his every movement is held in check, blocked by one border after another. The early part of the novel details his struggle to negotiate this realm, where a suspect can suddenly shift their allegiance as a new wall is erected. His confusion grows. The case leads him towards the city’s oldest and most mysterious border, the one where the story drifts towards the edge of the page. I have learned however that the Roman god Terminus demanded a blood sacrifice, to be placed once a year under the marker stone where one realm edged another. It made me nervous for Nyquist’s outcome: would he pass over this final borderline, or become a victim of it?

WITHIN AND WITHOUT ARE PLACE NAMES

The working title of the novel was Weird Song Of Breaking Through At Last, a song I remembered from my youth, as performed by a rather obscure progressive rock band called Principal Edwards Magic Theatre. With one day to go before sending off the first draft to the publisher, I was researching ideas for another novel, which took me to an old map of London, showing the city’s wall still in place, and the various gates of the city marked. I saw that some of the towns had two versions of their name, designated Within and Without. For instance, Bishopsgate Without, and Bishopsgate Within. Farringdon Within, Farringdon Without. These London wards had been separated into two by the route of the wall. Immediately I knew that some of my fictional city’s regions could use such a nomenclature: the concept fitted well with the novel’s theme. And then, a moment later the true title of the book came to me. Nyquist is never in one fixed location, but either inside, and then outside, or betwixt and between, within and without.

Not many people notice, or remember, the double quotation marks. There are levels of ambiguity implied. I read it like this: Someone is saying, “Oh, so you think you’re a pair of ‘heroes’, do you?” The first spark of Within Without started at the Victoria and Albert Museum’s exhibition celebrating David Bowie’s visual imagination, in 2013. I wandered around the exhibition, gazing at these large glass cases with the singer’s costumes inside, displayed on mannequins. I had a vision of the museum staff coming in early one morning and discovering that one of the costumes has vanished from a mannequin, without any sign of a break-in. A locked room mystery. I then pictured one of Bowie’s images separating from his body, escaping the flesh, to live its own life. Imagine: Ziggy Stardust or the Thin White Duke on the run in Berlin, merging into the remains of the Wall, which was now depicted, in my daydream, as a green hologram, a reconstructed tourist attraction. A few years later, after Bowie had passed away, I returned to this image and merged it with the idea of the city filled with borders. There is a long tradition in folk music of the border ballad, and I like to think of “‘Heroes’” as an up-to-date version of that genre, with its vision of the two lovers kissing by the wall as gunshots ring out overhead. So then: Bowie, borderlines, escaping images. Sentient masks. Masks as alien creatures that bond with humans, magnifying the host’s charismatic value. It all started to come together. Flesh, image: and the no-man’s land where they don’t quite meet. And Nyquist lost among it all.

YOU CAN ALWAYS TRUST ARIADNE

A friend bought me a pack of cards called the Red Thread, perhaps named after Ariadne’s roll of thread or “clew” which she gave to Theseus to help him map his way through the Minotaur’s labyrinth. The pack contains thirty-two cards, each one with its own image and a title: The Spectre, The Gift, The Twins, and so on. The cards have a strand of red thread across each image, which can be joined to the thread on other cards, to make a map through the images. Just before starting the first words of Within Without, I shuffled this deck and turned over the top card. Whatever came up, I would use in some way, as inspiration. I did this for the whole book, using the cards as a regular input, taking the images literally, or metaphorically, as I saw fit. Sometimes the turned-up card made perfect sense in the narrative, and at other times, I had to think at strange angles. But every single card was used. One card led to an automaton making an appearance, others to Adam and Eve, to a Plumed Horse, to Medusa. The red thread itself actually turned up in one chapter, pinned to the wall of a corridor, leading Nyquist on. I write without any planning, without looking ahead, writing to discover the plot and the characters, as they are needed. The cards helped in this, offering their little shocks and nudges. One card in particular had a deep and important effect on the story, something I truly never expected to happen…

THE COLLECTIVE NOUN IS A LOVELINESS OF LADYBIRDS

Yes, the card showed a ladybird. Because of this, many of them turned up in the story, a whole loveliness of them. I had taken Nyquist from the busy city streets, into a smaller encircled town called Escher. Here, something very drastic happens: all the external borderlines are drawn into the human mind. Nyquist, to his surprise (and to mine!) discovers that he has a wall running down the centre of his skull. And behind that wall, whispering, cajoling, is a character. Another man. This character has been there for most of Nyquist’s life, but only now can the two of them converse, through a tiny hole in the wall. The prominence of the ladybirds led to the name I gave to this internal occupant: Gregor Samsa. Samsa is the protagonist of The Metamorphosis by Franz Kafka, a novel detailing the transformation of a man into an insect. And so Nyquist finds himself moving towards a very dangerous borderline, where one species transforms into another, human into beetle. It might be said that science fiction itself, as a genre, operates in such a borderland, exploring those regions where one world crosses over into another world, old concepts into new.

JEFF NOON is an award-winning British novelist, short story writer and playwright. He won the Arthur C Clarke Award for Vurt, the John W Campbell award for Best New Writer, a Tinniswood Award for innovation in radio drama and the Mobil prize for playwriting. He was trained in the visual arts, and was musically active on the punk scene before starting to write plays for the theatre. His work spans SF and fantasy genres, exploring the ever-changing borderzone between genre fiction and the avant-garde.