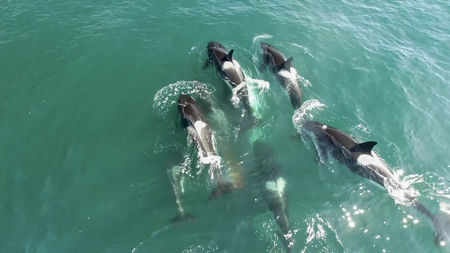 In the animal kingdom, killer whales are social stars: They travel in extended, varied family groups, care for grandchildren after menopause, and even imitate human speech. Now, marine biologists are adding one more behavior to the list: forming fast friendships. A new study suggests the whales rival chimpanzees, macaques, and even humans when it comes to the kinds of “social touching” that indicates strong bonds.

The study marks “a very important contribution to the field” of social behavior in dolphins and whales, says José Zamorano-Abramson, a comparative psychologist at the Complutense University of Madrid who wasn’t involved in the work. “These new images show lots of touching of many different types, probably related to different kinds of emotions, much like the complex social dynamics we see in great apes.”

Audio and video recordings have shown how some marine mammals maintain social structures—including male dolphins that learn the “names” of close allies. But there is little footage of wild killer whales—which hunt and play in open water. Although the whales only swim at about 6 kilometers per hour, it’s hard to fully observe them from boats, and they might not act naturally near humans, Zamorano-Abramson says.

That’s where drone technology came swooping in. Michael Weiss, a behavioral ecologist at the Center for Whale Research in Friday Harbor, Washington, teamed up with colleagues to launch unmanned drones from their 6.5-meter motorboat and from the shores of the northern Pacific Ocean, flying them 30 to 120 meters above a pod of 22 southern resident killer whales. That was high enough to respect federal aviation requirements—and not bother the whales. They logged 10 hours of footage over a 10-day period, marking the first time drones have been used to study friendly physical contacts in any cetacean.

To their surprise, the researchers recorded more than 800 instances of physical contact between individuals, they report this week in the Proceedings of the Royal Society B. Those included slippery hugs, back-to-back and nose-to-nose rubs, and “flipper slaps” between pairs of whales, all dispersed around bouts of leaping out of the water in perfect synchrony. Other whales playfully tossed calves into the air, letting them splash back into the water next to them.

Those interactions weren’t just random, Weiss says. The drone images revealed clear preferences among individuals, usually for one “best friend” of the same sex and age. Take J49 and J51—two distantly related young males ages 9 and 6—for instance. “Every time you see a group of whales, those two are right there interacting with each other,” Weiss says. “I wouldn’t hesitate to use the word friendship here.”

These rates of social interaction paralleled those seen in humans and nonhuman primates. “They’re making friends and reinforcing that bond with all this physical contact,” Weiss says. “We suspected killer whales were supertactile, but even we were surprised with how tactile they [actually] are.” The researchers also noted more than 1600 instances of synchronized jumping and breathing, behaviors that imply social cooperation, he adds.

The youngsters led most of these interactions, rather than older females or males. That runs contrary to a body of evidence showing older females’ central role in pods. Older males in particular were more “peripheral,” Weiss says. “The young individuals really seem to be the glue holding the groups together.”

This gradual loss of “centrality” as individuals age is known in many social mammals, including humans, and suggests a “kind of decline in sociality,” Weiss says. “One hypothesis is that as animals senesce, they are less able to engage in social interactions.”

That finding is “especially intriguing” for biological anthropologist Stacey Tecot at the University of Arizona, who wasn’t involved in the study. Scientists have long observed this “social aging” trend in primates, but “there are still a lot of unanswered questions,” she says. She hopes for more footage of the whales to learn more.

And that’s certainly on the researchers’ radar. “We’re already gathering new data, with more advanced equipment,” says Weiss, speaking from San Juan Island’s Snug Harbor, where his team just moored its boat for the night. “This study is just one piece of a much bigger movement to study different aspects of behavior in marine mammals.”