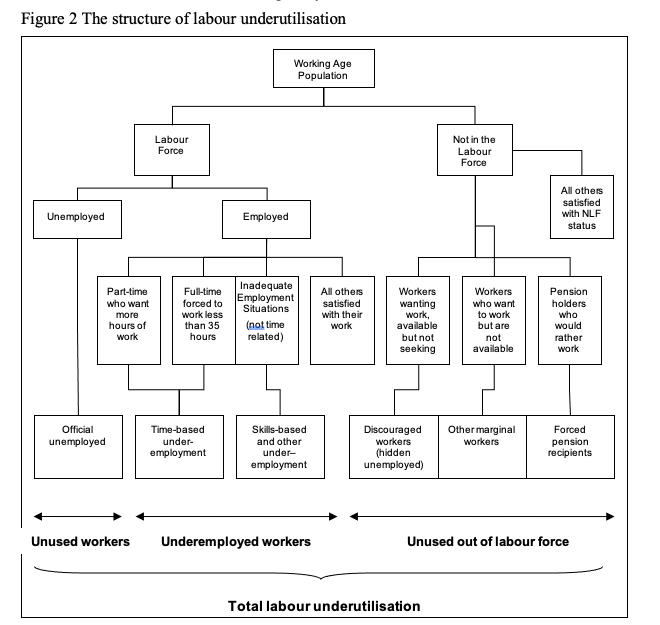 I have been updating my databases in the last few days and getting up to speed on the latest trends. In the past, I developed a set of broad labour market indicators for Australia with colleagues at the – Centre of Full Employment and Equity (CofFEE). Our quarterly measures of underemployment were precursors to the Australian Bureau of Statistics measures which are now published on a monthly basis. I was doing some calculations this morning using Eurostat data as part of some research I am doing to assess the inflationary potential that exists in various labour markets. As regular readers will know, my assessment of inflation risk starts in the labour market. Rarely do we encounter a situation where nominal spending outstrips the productive capacity of the economy (a demand-pull inflationary environment). That can occur is specific product segments but rarely overall. History tells us that there has to be some distributional struggle between labour and capital to drive an inflationary spiral. I am out there looking for any evidence of such a struggle. I am not having much success!

The labour force framework is the foundation for cross-country comparisons of labour market data and is made operational through the International Labour Organization (ILO) and its International Conference of Labour Statisticians (ICLS).

These conferences and expert meetings develop guidelines or norms for implementing the framework and generating national labour force data.

The rules contained within the framework generally have the following features:

As with most statistical measurements of activity, employment in informal sectors lies outside the scope of measurement.

A person is typically considered to be employed if they work 1 or more hours per week, which means the threshold between being unemployed and employed is marginally to say the least.

In terms of those out of the labour force, but marginally attached to it, the ILO states that persons marginally attached to the labour force are those not economically active under standard definitions of employment and unemployment, but who, following a change in one of the standard definitions of employment or unemployment, would be reclassified as economically active.

For example, changes in criteria used to define availability for work (whether defined as this week, in the next 4 weeks etc.) will change the numbers of people classified to each group.

It arises from a number of different reasons that can be subdivided into two broad functional categories:

The following diagram summarises the main sources of labour underutilisation and trace them back to their labour force status.

We consider a person to be unemployed if they are over a particular age, they do not have work, but they are currently available for work and actively seeking work.

Unemployment is defined as the difference between the economically active population (civilian labour force) and employment.

The inference is that the economy is wasting resources and sacrificing income by not having the unemployed involved in productive activity.

The diagram above shows that there are other avenues of labour resource wastage that are not captured by the unemployment rate as defined in this manner.

The persons represented in these other avenues of resource wastage may be either in or out of the labour force.

Time based and other types of underemployment

Underemployment may be time-related, referring to employed workers who are constrained by labour demand to work fewer hours than they desire, or to workers in inadequate employment situations, including skill mismatch.

An economy with rising underemployment is less efficient than an economy which meets the labour preferences for working hours.

In this regard, involuntary part-time workers share characteristics with the unemployed.

A part of an underemployed worker is employed and a part is unemployed, even though they are wholly classified among the employed.

Marginally attached workers and others outside the labour force

From a statistical consideration, discouraged workers (also called hidden unemployed) are classified as being not in the labour force.

The international guidelines suggest, however, that for persons not in the labour force, the relative strength of attachment to the labour market be measured.

They want to work and are available for work (under the same terms as the unemployed) but believe that search activity is futile given the depressed labour market.

The discouraged worker is thus more like the unemployed worker than they are, for example, like a retired person or a child in full-time education.

In the mid-1990s, the US Bureau of Labor Statistics developed six indicators to measure labour underutilisation.

The measures are arranged from very narrow indicator (short-term unemployment) to the broadest conception of labour wastage.

CofFEE adapted this technique to different data definitions and availability in Australia and the following Table describes the Measures of labour underutilisation and underemployment that we developed for Australia.

This morning, I calculated a version of those measures for the European Union 27 (again tailored to the way Eurostat presents its data).

As I noted in the Introduction, I am researching the possible inflationary environment in various countries and my starting place, as you would guess, is the state of the labour market.

It is very hard to precipitate an inflationary spiral if the labour market is flat.

The first graph shows the evolution of total employment and hours worked for the EU27 since the March-quarter 2008 to the December-quarter 2020 (the latest available data).

The series were indexed at 100 in the March-quarter 2008 (so just before the onset of the GFC).

The time series are interesting because they tell a story about how the European labour markets (in aggregate) adjusted to the GFC and the Pandemic.

During the GFC, both hours worked and employed persons were shed.

In the recovery, which was incredibly slow to emerge – it took until the March-quarter 2013 for employment to reach the trough (the downturn) as a result of the ridiculous austerity that was imposed across the Member States.

And employment did not return to its pre-GFC level until the December-quarter 2016.

Hours worked also fell for many years, reaching the trough in the June-quarter 2013 and in the lead-up to the pandemic had still not reached the pre-GFC level.

That should be emphasised – the European Union 27 Member States in total were still working less hours in the December-quarter 2019 than they were working in the March-quarter 2008 and that is not because of enlightened employment practices.

However, hours worked collapsed by 5.1 points over the same period.

This pattern is the result of the policies that were implemented by various nations during the Pandemic which aimed to protect the employee-employer relation while shutting down workplaces.

Just looking at that data indicates to me that there is little likelihood of any strong wage pressures emerging within the European Union.

The next graph shows the official unemployment rate (U3) and the broadest measure of labour underutilisation (U6) for the EU27.

You can see that during the GFC, the European Commission through its obsessive austerity mindset allowed labour wastage to rise above 20 per cent and only slowly retreat.

Just before the pandemic, the broadest rate had only fallen marginally below the pre-GFC level.

By the December-quarter 2020, the official unemployment rate was 7.5 per cent which was 0.7 points above the pre-pandemic level.

The unemployment rate was 3.1 per cent, effectively unchanged over the pandemic.

You can draw two broad conclusions.

1. Quoting the unemployment rate as the indicator of the state of the EU27 labour market is likely to grossly underestimate the extent of labour wastage.

2. With 14.8 per cent of the willing labour resources underutilised in one way or another, it is hard to see any wage pressures emerging from that depressed labour market.

I will report more on this research as it unfolds.