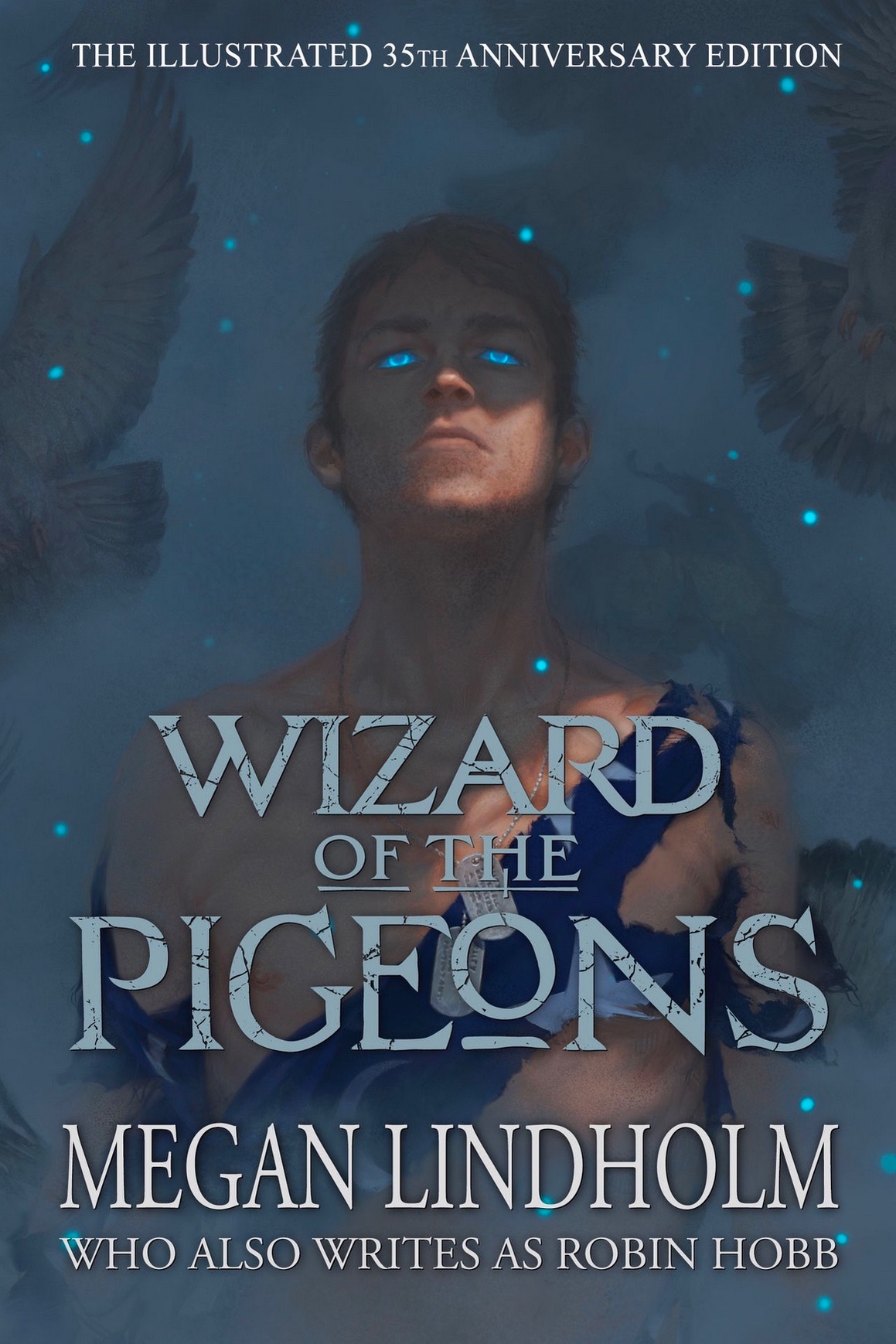 It is an absolute pleasure to host a guest post by one of my favorite authors — Megan Lindholm (who you may have read as Robin Hobb), who is here to talk about the story of the City Primeval — and the 35th anniversary of her novel, Wizard of the Pigeons.

Why, yes. Yes, I do know what primeval means. Ancient. Original. Prehistoric.

So how can a city be any of those things? A city is built by humans, many humans, and it takes years of habitation before it can be called a city. Even if it’s abandoned and falls into ruin, even if the jungle or sands overtake it, or later generations rob it of its memorials, and cart away its bricks and stonework to be used elsewhere, it still can’t be primeval, can it?

Well, I don’t usually corrupt a word, but in this case, I’m going to. In fantasy, there are numerous primeval cities, ones built so long ago that everyone has forgotten them. There are cities that predate the younger age of humanity, full of ancient wonder and magic. In Science Fiction, there are even more and stranger primeval cities; ancient ruins, abandoned by the aliens who built them, full of riddles, puzzles and dangers. A rediscovered city is one of the tropes of our genre, the ideal setting for a game of Dungeons and Dragons, or a tale of awakening old magic, or a Leiber or Howard yarn of Swords and Sorcery.

Have you ever been in an unfamiliar forest, with night coming on, uncertain of which direction will lead you back to your camp or a well-marked trail? You might wonder what else is out there with you, and you will listen, and strain your eyes to see through the darkness, fearing that you have blundered into the territory of an unknown predator, something that operates on rules that you cannot comprehend. Something that sees you only as prey.

Oh, wait. That’s not you in the forest. That’s me, in a city. And not an ancient, forgotten city, but a modern one. New York. Seattle. Paris. London. Edinburgh. Cities have always defied me; my sense of direction fails me when I cannot see the sun or moon. The buildings of concrete and steel and glass are faceless. Even in a retail district with lit display windows, in the small hours of the morning, the emptied streets seem threatening to me. Lighting is uneven, alleys gape, passing traffic glares and blares. And a big city, where the foot traffic remains lively all night? My caution remains.

A big city is the place where our most ancient predators are common. We are stalked by the creature that have always represented the greatest danger to any person: our fellow humans. And unlike a cougar or a skunk or a snake, the motive for attack can be completely incomprehensible. In the forest, one does not fear rape or robbery or harassment. But in a city?

Doubt me? Pooh-pooh this idea as that of a scared old woman? There is a natural law that I’ve never seen broken. Predators follow prey. It’s true on the tundra of Alaska, or the plains of Africa. And the more prey that is present, the greater the number of predators. Is that true of humans? Of course it is. Visit a big city bus station, or park outside a homeless warming shelter, or a soup kitchen. Go to a crowded retail mall when the holiday crowds are in full shopping frenzy. Sit down and watch. You won’t need binoculars to see them. The traffickers, the drug pushers, the petty thieves; they move through the crowd, looking for an opportunity. Or they seek a location from which they can watch the passing herd, and single out the one that looks most vulnerable to what they are offering. Or taking.  Beyond those predators are the creatures once human who will prey on the weak of helpless, for reasons that only they can grasp. Or for reasons that, in their damaged minds, they cannot verbalize at all. The vampires. The werewolves.

Is this overly dramatic for you? For me, it’s not. For me, the primeval predators and their ancient threats to humans are what make contemporary urban fantasy so appealing. That slice of the fantasy genre acknowledges what all of us know on a gut level. The magic didn’t go away with the arrival of the Age of Enlightenment. The creatures that preyed on us through medieval times are still with us. And they are still just as dark and dangerous as we can imagine. And probably more than we can imagine.

I wrote Wizard of the Pigeons over 35 years ago. Seattle was the first big city that I visited on a regular basis. To me, it felt far more dangerous than the forests I had known. The ‘Seattle Freeze’, the concept that Seattleites are generally stand offish and chilly toward newcomers was in evidence. The growing homeless population that now shelters in our parks and medians and street corners with their little dome tents and blue tarps was not evident then. But it was beginning. The signs were there: the sleeping bags that were tucked up under the scant concrete shelter of an overpass, the men sleeping on the park benches during the day when it was safer to be unconscious in a public place. I saw a scattering of beggars on street corners with their softening cardboard signs. It was a time when Vietnam veterans were still badly treated, and there were many of them among the street people of that era.

Within my extended family and among my friends were young men who had returned baffled and damaged by a war that made small sense to many of us. The high school boys we had dated and danced with and kissed goodnight had returned, but not as the fellows we had known. Seeing young men in worn fatigue jackets drunk in the park in mid-morning or huddled, back to a dumpster, in an alley as evening came on made me wonder. Whose boyfriend, whose son, whose brother, whose former husband were those men?  What family was missing a piece? But there were also moments of seeing a couple of them sharing a cigarette on a park bench. Or greeting one another with a hoarse laugh and a pound on the back. Moments that showed me that in some ways, they were moving in circles that I would never be able to access, forming alliances and moving forwards in ways I would never see.

There are many reasons for writing a fantasy. With Wizard, I felt there was an unacknowledged reservoir of power and resilience in the veterans I was seeing on the street. Battered and baffled, but somehow moving forward. I wanted to write about that. And, in many ways, my wish fulfillment was to try to write an ending for one of them that acknowledged that core of strength. So I wrote my story of the City Primeval, and those who wielded the power to both protect that city, and to save their own lives.