Andy Murray hopes he will wake up not feeling the effects of his groin injury which has blighted his attempts to play regular competitive tennis since March; the former British No 1 will face one of two qualifiers, Oscar Otte or Arthur Rinderknech, next

Andy Murray feels his competitive instinct kicked in after he overcame a dramatic third-set collapse to defeat Nikoloz Basilashvili and make a winning return to Wimbledon.

The Scot, playing his first singles match at Wimbledon since 2017, looked set to cruise over the line when he led by two sets and 5-0 in front of Centre Court, which, although only at 50 per cent capacity, boisterous spectators and the famous Murray roar were doing their best to make up for the empty seats.

But the former world No 1 faltered within sight of the winning line as 24th seed Basilashvili reeled off seven games in a row, saving two match points, to force a fourth set with darkness closing in.

That meant a delay while the roof was closed allowing Murray to regroup, and when they returned he moved back in front and this time finished the job off. 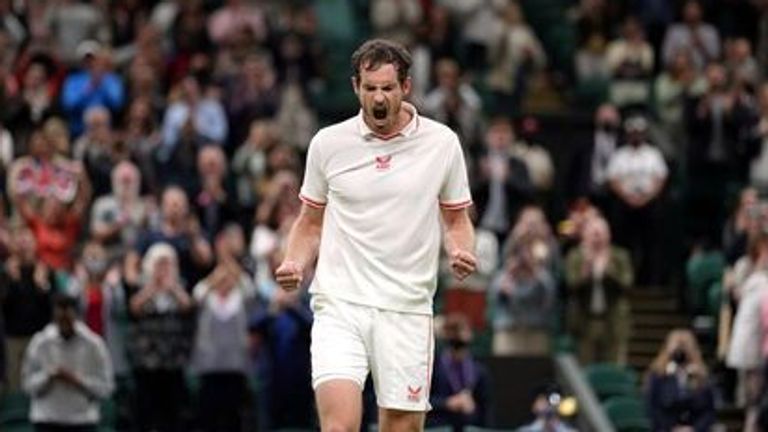 “Whether that was playing football or tennis, golf, whatever. I was always playing games and always competing.”

Andy Murray on his competitive instinct

“I dealt with the pressure of the match really well until the end of the third set when I didn’t. But I don’t think there’s many players that would have won that fourth set. A lot of players would have capitulated there and I did the opposite of that,” the two-time Wimbledon champion said.

“When you’re starting the fourth set, having just lost seven games on the spin, and the headlines that you have choked and those sorts of things and it’s one of the worst defeats of your career is what you would have heard after that match had I lost, it’s not easy to turn that round.”

Asked about his competitive instinct, the 34-year-old said it was something that had been ingrained in his DNA from an early age.

“I was just exposed to competition from a very young age with my brother and then with tennis and playing sports,” he said.

“There was that element of that winning and losing, elements of pretty much everything I was doing as my hobbies or in my spare time. Whether that was playing football or tennis, golf, whatever. I was always playing games and always competing.

“I have enjoyed playing board games. Just done it loads since I was a kid. So just had a lot of exposure to it, and it comes quite naturally. It feels natural now, it’s instinctive now, but it wasn’t like I was born that way. I think it was because of the way I was brought up.”

This was only Murray’s sixth tour-level match this year, with a groin problem having been niggling away since March, and it was clear in his two matches at Queen’s Club that the Scot was rusty.

But some high-level practice sessions, including on Friday with Roger Federer, had given him extra time on court and the difference was noticeable.

However, the Scot is still wary of his injury problems of the past, including after his defeated Japan’s Yoshihito Nishioka in five gruelling sets at last year’s US Open.

“I have to wait and see (how I feel) because in New York, for example, I actually did pretty well in the first round against Nishioka and felt fine that evening, and then I woke up the next day and could barely walk. My groin was really painful and I didn’t recover from that match at all.

“Just now I feel a bit like my legs feel tired and sort of heavy. But pain-wise I feel all right just now. I will be really hoping I wake up tomorrow morning feeling all right.”