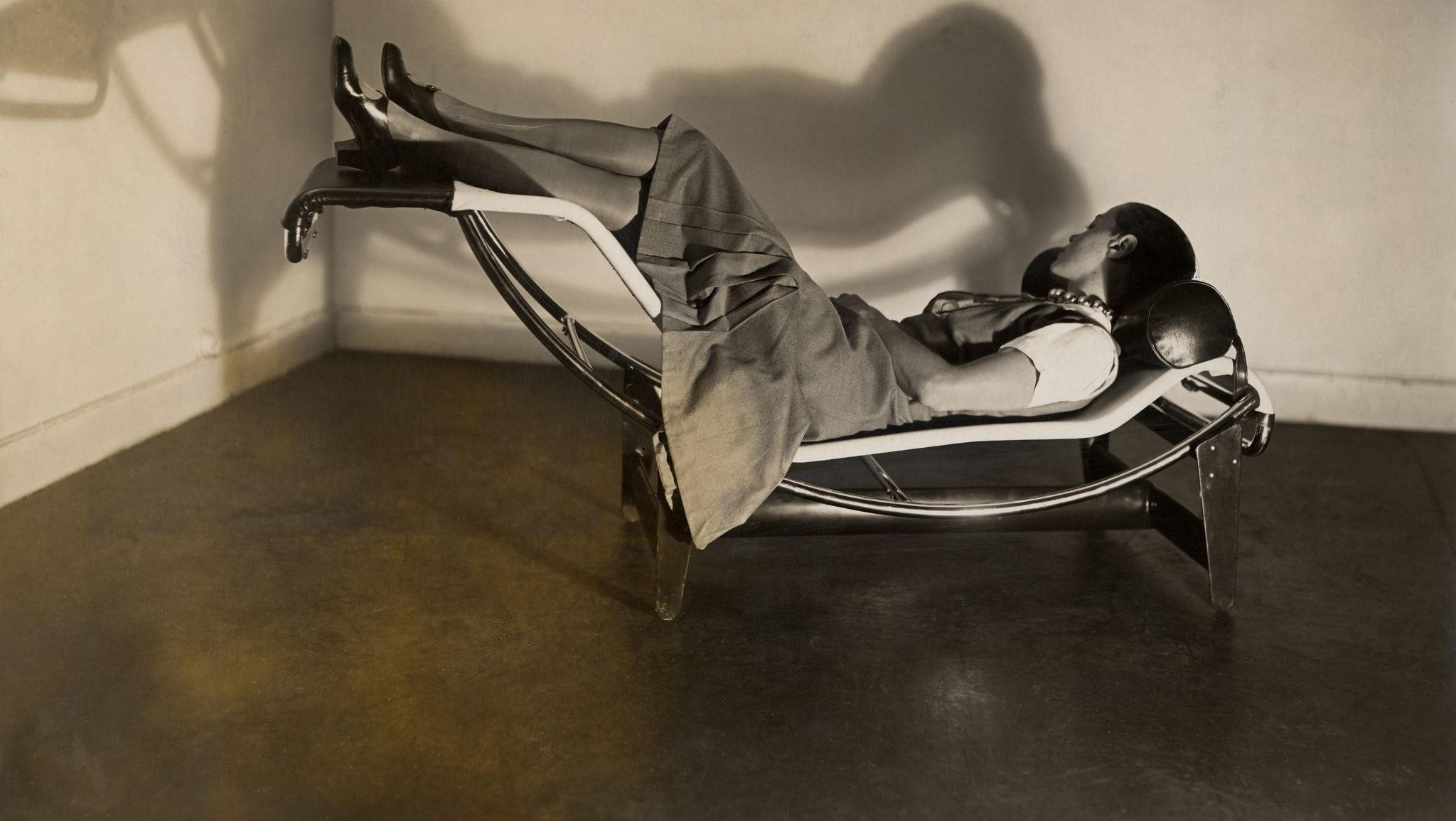 Charlotte Perriand on the chaise longue basculante B306, 1929 / AChP/ADAGP, Paris and DACS, London 2021. Via the Design Museum

At last we have a chance to see a major retrospective of the work of the interior architect and furniture designer Charlotte Perriand (1903 to 1999). A Parisian of modest background she joined the Atelier of Le Corbusier, in 1927. As a young woman with bobbed hair who wore a necklace of ball bearings, she stood out in the company of all the male architects she worked alongside. Her brief was to design suitable pieces of furniture to fill the white cube interiors of the buildings Le Corbusier and his colleagues were designing. She made prototypes of new seating for her own attic apartment and along with her colleagues drew up designs for chrome tubular and leather chairs. These were manufactured at that stage by the celebrated firm Thonet.

The Modern Life exhibition at London’s Design Museum includes Perriand’s sketches and annotated working drawings alongside prototypes of the now iconic chairs: the chunky leather Grand Confort armchair; the reclining Chaise longue; and the swivel chair designed for dining or for a desk. These are shown in reconstructions of the original room installations, which were exhibited at design fairs to promote this new type of furniture. Originally attributed to Le Corbusier and Pierre Jeanneret, these designs are now rightly attributed to Charlotte Perriand. Her daughter and colleague in latter life, Pernette Perriand Barsac, explained in an insightful interview with Michelle Ogundehin (in 2012) that “the royalty money enabled Charlotte to live and now maintains the archive and allows us to mount exhibitions This is the only way her memory can live on.”

After ten years working in the Corbusier studio, she left to work on other projects in 1937.  With little money available, opportunities diminished but she managed to secure a job in Tokyo through the assistance of her friend Junzo Sakakura. The intrepid young designer left Marseille on a long voyage by sea in 1940 shortly before the Nazis occupied Paris. She was to remain in Asia, first in Japan and then in Vietnam, until her return to Paris with husband Jacques Martin and  daughter Pernette in 1946.

Her design aesthetic modified in the 1930s onwards. From the hard textures and metallic finishes of her early modernist works she created freeform wooden tables with three legs and boomerang shaped desks. For an exhibition held in a Tokyo department store in 1941 to showcase a fusion of traditional Japanese materials and a western sensibility she designed a version of her chaise, but instead of chrome and leather she used bamboo and a wooden support.

The final room in the exhibition is dedicated to her designs for the Alps, where she grew up visiting her paternal grandparents in the Savoie. A keen skier and mountaineer she designed a chalet for herself in Meribel in 1960 and then in collaboration with property developers worked on an ambitious project for an alpine ski resort Les Arcs 1600 in Savoie. The seminal Facing a Valley photograph of Perriand with her cropped hair, topless in the snowy mountains, captures her spirit of adventure  perfectly. A fitting end to a wonderful exhibition, celebrating the life of a true maverick.

Charlotte Perriand: The Modern Life is showing at the Design Museum until 5 September 2021.