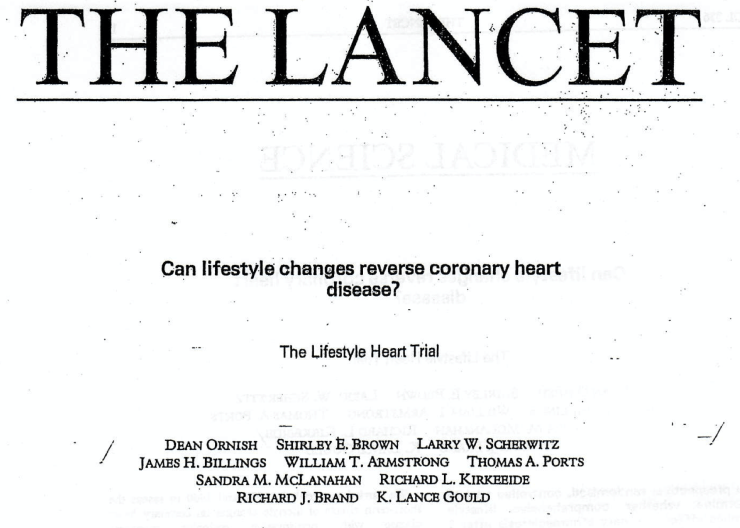 This story takes us back about 25 years, but here was my introduction to a vegetarian lifestyle from the late 1990s.

I was practicing interventional cardiology in Cleveland, Ohio, then Milwaukee, Wisconsin, introducing some of the new technologies such as stents, atherectomy, and excimer laser into hospital systems. Back then, I would also attend meetings of the American College of Cardiology (ACC) to learn about new technologies. It was an opportunity to hear about both new scientific reports as well as industry innovations (which were rolling out at breakneck speed at that time). One year, the ACC was held in Atlanta. In addition to the bounty of information on new technologies, new devices, and new drugs, I spotted a poster advertising a presentation to be given by Dr. Dean Ornish to discuss the results of his Lifestyle Heart Trial in which he claims to have reversed coronary disease. Despite my day job in heart procedures, I found Ornish’s claim interesting, so I attended.

Dr. Ornish described how, by putting a small number of people (28) on a strict low-fat vegetarian diet, he believed that participants achieved mild reversal of the severity of coronary artery blockages, reducing percent stenosis (artery diameter reduction) from 40% to 37.8%, while the control group experienced modest worsening. While some red flags went off in my head, I thought that I would give his approach a personal try. I therefore adopted Ornish’s concept of a strict low-fat (10% or fewer calories from fats and oils) with no meats, poultry, or fish with a diet that was limited to whole grains, fruits, and vegetables, no butter, olive oil, or other added oils. My personal result over a number of months:

In other words, I became a metabolic mess: increased markers for cardiovascular risk, hypertension, type 2 diabetes. Granted, my LDL cholesterol dropped, but not the superior measure LDL particle number (obtained also via NMR). This was during a time when I was jogging 3-5 miles several days per week, played tennis and went biking regularly. I actually called Dr. Ornish and shared my story. He promptly got irritated and advised me that I hadn’t followed his program correctly and consumed too many processed white flour products. I assured him that I had not. The conversation got a bit heated at that point and we both hung up. Ornish also countered the skepticism of other critics who also noted, in particular, the rise in triglycerides and low HDL, arguing that these metabolic distortions were harmless in the context of a low-fat diet, a claim that has absolutely no basis in evidence.

Before I recognized the dangers of his program, I had something like a hundred patients of mine give the Ornish vegetarian low-fat program a try also, people who had coronary disease (had a history of heart attack, having undergone angioplasty or stent implantation, underwent prior bypass surgery, etc.). They likewise banished all added oils and animal products, adhering to a strict vegetarian low-fat lifestyle. Like me, they developed metabolic distortions with deterioration of multiple coronary risk factors. Once again, LDL cholesterol typically dropped, but HDL dropped, triglycerides skyrocketed, small LDL particles increased, blood sugar increased, measures of insulin resistance increased, blood pressure increased.

Of course, I abandoned all such efforts at recreating Ornish’s results. It also became clear that Ornish had made several crucial miscalculations in his study:

And don’t forget that following a vegetarian lifestyle creates deficiencies of several important nutrients including vitamin B12, zinc, iron, omega-3 fatty acids EPA + DHA (that cannot be compensated for by increasing intake of linolenic acid sources), and others. Long-term, this can result in health issues such as neurological impairment, depression, memory loss, impaired immune response, and impaired growth and development in children. Anyone following a vegetarian or vegan lifestyle therefore needs to supplement these nutrients to compensate for the deficiencies of the lifestyle. (In the Wheat Belly program, we also add several nutritional supplements, but these compensate for the deficiencies of modern lifestyles, not the diet. We supplement magnesium, for instance, because by necessity we filter drinking water that removes all magnesium. We supplement vitamin D because we live largely indoor lives, wear clothes that cover much skin surface area, and lose the ability to activate vitamin D in the skin as we age. This has nothing to do with our wheat/grain-free diet, but with the inadequacies of how we live in the modern world.)

This has, unfortunately, not stopped some of my colleagues to accept Dr. Ornish’s misinterpretations and less-than-optimal results and advise their patients with coronary disease to follow this deeply flawed program. There are even some health insurers who have permitted reimbursement for participating in the program.

A vegetarian lifestyle does not yield improvements in metabolic markers aside from the flawed LDL cholesterol, does not yield reversal of coronary disease nor freedom from cardiovascular events like heart attack, and yields several long-term nutritional deficiencies unless specific nutrients are supplemented. Don’t fall for the misinterpretations of purported evidence such as Ornish’s Lifestyle Heart Trial, nor the misinterpretations of the observational evidence that has never demonstrated health benefits of a vegetarian lifestyle. Never limit dietary fat, choose organic foods whenever possible, and certainly consume no modern wheat nor grains—i.e., mimic the dietary habits of humans who preceded us for 3.5 million years, whose lifestyle is programmed into our genetic code while correcting the nutrient deficiencies that result from modern life—that is what we do around here in the Wheat Belly lifestyle.

By the way, by going off the Ornish program 20+ years ago and following the strategies of the Wheat Belly and Undoctored programs, last checked my HDL cholesterol was 94 mg/dl, triglycerides 47 mg/dl, small LDL particles zero, fasting blood sugar 84 mg/dl, HbA1c 4.8%, blood pressure 112/74—everything back to optimal without the health impairments of a low-fat vegetarian lifestyle.