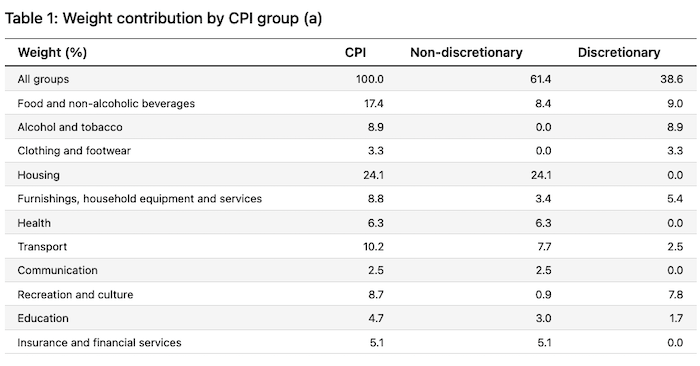 On November 11, 2020, the Australian Bureau of Statistics published a very interesting new experimental dataset – Non-Discretionary and Discretionary Inflation – which was derived from the standard Consumer Price Index data. It provided us with new insights and a richer knowledge of the impacts of inflation, particularly in distributional terms. Last month (May 25, 2021), the ABS published a followup article – Measuring Non-discretionary and Discretionary Inflation – which summarised some of the key findings. After receiving feedback, the ABS has refined the data series and will publish them on an on-going basis from the September-quarter 2021 as part of the “regular quarterly CPI release”. This new approach to measuring inflation will help us considerably assess the implication of wage movements on the real living standards of Australian workers.

New insights from the ABS data

The ABS wrote in its introduction to this new experimental data that:

The Consumer Price Index (CPI) measures price change for goods and services purchased by Australian households in the eight capital cities. It is a measure of inflation that informs monetary and fiscal policy. It is also used widely by economists and the general community to assess the health of the Australian economy.

The problem is that the aggregate data doesn’t tell us the impact of price increases on goods and services that might be considered:

… essential (non-discretionary), compared to goods and services that are more discretionary in nature.

That gap motivated their work to expand the information set.

Accordingly, if, for example, prices were rising faster for non-discretionary items relative to discretionary goods and services, then the inflationary process is more punitive to the lower income workers than otherwise.

This new experimental dataset allows us to go deeper into the data to examine these sorts of distributional impacts.

Further, this dataset has been developed at a time when wages growth in Australia is at record lows and profits have been booming.

Incomes from profits are likely to go to recipients that have a much higher proportion of their expenditure defined by discretionary items.

So we can also gain a better understanding of how the recent trends have impacted on wage earners who have endured flat wage growth profiles.

The ABS definitions are as follows:

Goods or services which are purchased because they meet a basic need (food, shelter, healthcare), are required to maintain current living arrangements (car maintenance, school fees), or are a legal obligation (compulsory insurance, stamp duty).

Goods or services which could be considered ‘optional’ purchases, such as take away meals, alcohol and holidays.

Spending on these goods and services may be more responsive to changes in household wealth or relative prices.

They found that 61.4 per cent of goods and services in the All Groups CPI were weighted as Non-discretionary (38.67 per cent being discretionary).

This Table was provided by the ABS to see the weights by these categories in the overall CPI. They also provide a more detailed breakdown at the site linked to above.

The May 2021 update from the ABS noted above traced cumulative inflation from 2005/06 to the December-quarter 2020, which means it covers some of the pandemic period.

The ABS find that:

1. Overall All Groups CPI rose by 38.9 per cent over that period.

2. Discretionary goods and services rose by 31.8 per cent.

Over the period 2005 and 2020, “Non-discretionary inflation exceeded overall CPI inflation”.

The ABS note that the main drivers of this result was “housing, health and education.”

As I have noted in the past, administrative pricing decisions (by government etc) are significant drivers of price dynamics.

So Non-discretionary price inflation fell and rose again in 2020 because of the “introduction of free child care im the June quarter and the removal in the September quarter as well as the volatility of automatic fuel prices”.

While these movements impact differentially on the purchasing power of different income cohorts, they are not harbingers of an entrenched inflation.

The largest component of Discretionary inflation was tobacco price rises (prices increasing by 400 per cent) and this is another example of government policy decisions driving the inflation process independent of fundamental supply and demand forces in the economy.

Government tobacco excise rises occur annually in Australia and these policy decisions are a very significant driver of Discretionary inflation.

The ABS point out that less than 15 per cent of Australians are smokers, which means that this impact is quite confined.

So, if we exclude tobacco (noting the 15 per cent usage), we get a better measure of Discretionary inflation for most people.

In that context, Non-discretionary inflation is running at 2.3 times the rate of Discretionary inflation since 2006 – that is, the goods and services that we consider to be essential or basis to maintaining our standards of living have become much more expensive over the last 15 years than those that we can avoid if necessary.

Comparing the new inflation measures with movements in wage rates in Australia allows us to calculate the evolution of real wages since 2006.

The following graph show the real wages growth (per cent) from the June-quarter 2006 to the December-quarter 2020 using the All Groups CPI.

So prior to the pandemic and in the aftermath of the GFC, wage earners who spent most of their income on Non-discretionary goods and services experienced extended periods of real wage cuts.

Other income recipients whose income were in some way tied to CPI movements via indexation arrangements also endured real wage suppression if not cuts.

As the pandemic period is affected significantly by government policy decisions as noted above.

This dataset, once released in full in the September-quarter 2021, will enhance our analysis considerably.

The data also bears on long-standing theoretical debates in macroeconomics, which I will explore further once the regular time series are published.

In the 1930s, John Maynard Keynes criticised the accepted neoclassical view that unemployment was the consequence of excessive real wages (relative to productivity) and that real wage cuts would ‘cure’ mass unemployment.

I traced that debate in this 9-part series that was part of the drafting of the manuscript of our MMT textbook – Macroeconomics:

The relevance of this debate for this particular new dataset is the rationale that Keynes provided to justify his view that while workers would resist money wage cuts that delivered real wage cuts, they would accept real wage cuts that were driven by movements in the general price level.

The orthodox approach in the early 1930s – the so-called ‘British Treasury View’ – led to the conclusion that any enduring unemployment (beyond the frictional level) was caused by real wages being above the equilibrium level, principally because money wages were downwardly rigid.

The Chancellor at the time, Winston Churchill articulated the ‘View’ that governments could not reduce unemployment unless they engineered money wage cuts (Source)

Keynes disputed this reasoning and outlined a new approach to the labour market, which provided an explanation for mass unemployment that was independent of whether wages were flexible or not.

In other words, he set out to show that the existence of mass unemployment was not related to the question of wage flexibility.

In developing his explanation for the existence of involuntary unemployment, Keynes sought to show that mass unemployment arose as a result of systemic failures, which left individuals powerless to improve their own circumstances.

Keynes argied that workers behaved in an asymmetric way to real wage reductions, depending on whether they were motivated by money wage reductions or a rise in the general price level.

He argued that workers would withdraw their labour services if money wages were cut (and real wages fell) but would not respond in this way, if an equivalent real wage cut resulted from the price level rising.

In other words, as a general case, it is observed that workers do not necessarily withdraw their labour services when the real wage falls.

It all depends on what motivates that reduction.

Recall that the real wage is a ratio of the money wage and the general price level.

The clue to understanding his argument was to note that the Classical model ignored real world issues – such as Discretionary and Non-discretionary expenditure.

In the real world, workers are also concerned with the level of money wages as well as the purchasing power equivalent of the same (the real wage).

The neoclassical economists (and modern New Keynesians) considered that that it is irrational or illogical for workers to suffer from what they called “money illusion”.

That is, why would workers care about the nominal value of their wage.

Surely, it is only the real wage that matters because their decision to supply labour was to acquire real goods and services from the income they earned?

First, he noted that while a rise in the general price level affected all workers, money wage cuts would be typically applied to certain segments of the workforce (where unemployment was concentrated).

Research confirms that workers are influenced by their relative place in the wage structure, given that wages are one way in which we measure social status.

One’s money wage is more visible to others than the more ambiguous concept of the real wage.

At parties and other social milieu, we informally judge each other by the income levels that we receive.

These are concerns that the orthodox economists ignore.

If a worker in a particular industry was to accept a money wage cut when that industry was enduring a downturn in demand for its output, then they would be downgrading their position in the wage structure.

They would also form the view that their relative position in the wage structure would not be reversed when the economy improved again.

As a result, these workers will resist a money wage cut.

However, they will not necessarily resist a real wage cut (of the same implied magnitude as would result from the money wage reduction) arising from a rise in the general price level because this would impact on all workers and the relative positions in the wage structure would be maintained.

They would all be worse off but not in relative terms.

The second reason why workers would resist money wages relates to the financial arrangements that workers enter into in the normal course of their lives.

It is here that the Discretionary/Non-discretionary distinction is important.

A major commitment that many workers enter is the purchase of their homes.

Further, workers use credit to smooth their consumption expenditure over time.

These contractual commitments are always specified in nominal (that is, money) terms. For example, a worker has to pay a certain quantity of dollars per month to service their home mortgage.

In other words, the solvency of the workers is a nominal concept.

If they cannot get sufficient money each period to service their nominal contractual commitments as well as their basic purchases (Non-discretionary items) then they are in trouble.

In this context, if the general price level rises and the real value of their money wage declines, for a time, they are able to change their budget allocations (perhaps eliminate some non-necessary of Discretionary items of expenditure) and still maintain their nominal contractual obligations.

At some point, this becomes impossible but within the usual variations in the real wage this is how households cope.

However, if the real wage was to be adjusted via reductions in the money wage, workers might find they do not have enough money income in a period to service their contractual obligations and they would then have to default and face insolvency.

Clearly, it is rational to resist that eventuality and thus workers care not only about the real wage they are able to earn but also the level of money wages that they receive.

However, Keynes did not consider these institutional objections to be fundamental to the theoretical veracity of the Classical employment model.

I am awaiting the full release of the ABS inflation data in September 2021 with considerable interest.