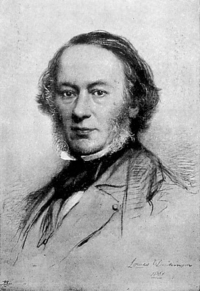 Don Boudreaux hosted an excellent podcast discussion on Discourse Magazine Podcast on the abolition of the Corn Laws. The debate involved Steve Davies and Douglas Irwin and Arvind Panagariya. It is worth listening to today, as it was on June 25th, 1846, that the Duke of Wellington persuaded the Lords to approve the repeal of the Corn Laws (following the Commons).

The conversation is really great and a lot of interesting points are made. Both Davies and Irwin explain clearly how grain protectionism functioned. Steve Davies captures the political spirit of the age, placing the Anti-Corn Law League in context and alluding to the power of that movement, perhaps one of the first that really heralded contemporary politics by putting together “a mass movement which made use of all of the means of communication that were becoming available at the time, such as the use of the newly established railways and turnpikes, to build a national organization”. Circumstances of course helped. This is a crucial point, a point often overlooked by politically oriented people, either classical liberal/ libertarians or, I suppose, within different political movements too, hardly see. “The Anti-Corn Law League was increasingly pushing, if you like, at a door that was being slowly opened by the Whig aristocrats.” One crucial part of the League’s success was rooted in its circumstances, which of course does not imply to diminish the role and courage and commitment of people like Cobden and Bright, nor the admirable ability to communicate with people they displayed, nor their organizational efforts.

Davies sees the long term consequences of the League not so much in the Repeal itself (Peel may have been persuaded purely on intellectual grounds: quite a sentence to write about a prime minister!) but on two fronts:

One is it ensured that when the repeal came, it was total and immediate—well, free of a phasing-in period, but effectively immediate. It wasn’t a kind of slow, gradual or half-hearted process. It was an abrupt and dramatic one.

But the other, more important thing was the thing you alluded to that Frank Trentmann talks about. They had a huge effect on the popular culture, and they fixed in the minds of the British working class in particular, right up to the present day, the profound belief that free trade is good for the poor and the working man and woman and that protectionism is basically a conspiracy by the rich and special interests to screw over the working class.

My favorite bit of the conversation is a summary of a recent paper of his by Irwin:

The Corn Laws had been revised in 1815. There was a huge debate that involved David Ricardo and a bunch of others. Some pressure to reduce it in the 1830s, but it was really appeals for reforms in the 1840s that got rid of it. At that time, when the Corn Law tariff, the ad valorem equivalent, hit about 40%, it was basically prohibitive. In the late 1830s, early 1840s, there were no imports of grain for certain periods when world prices were low. Therefore, the tariff was high.
But right around the time of the repeal, the tariff was about 28%. So what Maksym and I do in our paper is we do a simulation of, what is the economic consequences of getting rid of a 28% tariff on grain? This is a time when agriculture is a pretty big sector in Britain. About 9% of employment was in grain agriculture. About 24% of total British employment was in agriculture altogether.
First of all, that’s an important note, that grain agriculture was not all of British agriculture; it was just a segment of it. There was pastoral agriculture, which is actually exporting from Britain.

BOUDREAUX: That would be things like sheep farming and—

IRWIN: Exactly. Wool, meats, other things like that. That’s important because the claim is always “You can’t open up your market because it will devastate the sector.” Well, there’s different components of the sector, and some actually did very well after the repeal of the Corn Laws. Not grain agriculture, which is important for bread, as Steve was saying.
When you get rid of an import tariff, you’re going to import more of those commodities. You’re going to have to pay for that, so your exports of other goods will go up. You’re going to be reshuffling resources around the economy when you do that, and we basically find three things.
One is, yes, there are efficiency gains from doing this. You’re going to reallocate capital labor to where you have a comparative advantage, and the economy will be better off for that. But also, Britain was a large player in world markets at this time, and there are some adverse terms-of-trade effects, namely that the prices of your exports will go down because Britain was a big player in the world textile market. You might depress some of those prices.
You’re going to drive up the world price of grain and cotton because you’re once again drawing on the world’s resources, and Britain was such a major economy. It turns out what we find is the terms-of-trade losses and the efficiency gains basically wash out. They offset each other.
The second thing is that there’s going to be a lot of redistribution of income within the country. Here’s where David Ricardo and others really nailed it. Land grants went down, and that’s what we find in our simulation, but real wages will go up and the return to capital will go up.
Then the third thing we find is we actually disaggregate income distribution effects a little bit in a very crude way. What we find is that the top 10% of income earners were worse off and the bottom 90% were better off.

Read (listen to) the whole thing.