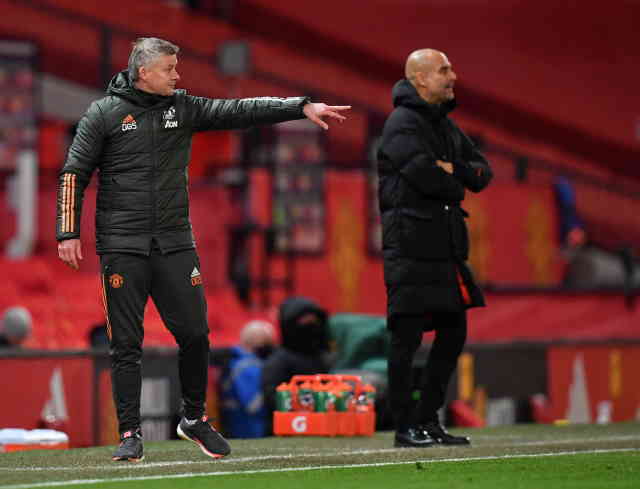 The derby ended in a goalless draw at Old Trafford on Saturday evening as Manchester United and Manchester City both missed out on the opportunity to move into the top four.

Marcus Rashford thought he’d won us a second-half penalty when he was tripped inside the box by Kyle Walker, but VAR intervened to show the striker had been offside in the build up.

Neither goalkeeper had much to do all game but avoiding defeat had been key for Ole Gunnar Solskjaer following Tuesday’s exit from the Champions League.

Here are my player ratings from Manchester United 0-0 Manchester City, as per Sorare Review:

David de Gea 7 – A very comfortable evening for the Spaniard, who picked up tame efforts from Riyad Mahrez and Rodri but had little else to do all game.

Aaron Wan-Bissaka 8 – Numerous recovery tackles around his own penalty area. Offered little going forward from right wingback and did get caught out of position a few times, but you could not fault Aaron Wan-Bissaka in terms of winning the ball back for us.

Victor Lindelof 8 – Committed a few fouls but overall denied Gabriel Jesus any sights on goal. An early flicked header from a corner nearly setup a chance for Scott McTominay.

Harry Maguire 8 – The odd nervous moment and a foul on Jesus that earned him a yellow card. Picked off a number of passes and played a few decent ones of his own. Made a key block to deny Kevin De Bruyne opening the scoring midway through the second half.

Luke Shaw 9 – Solid performance at left-back that kept Riyad Mahrez quiet, whilst getting forward himself to put the odd cross into the Manchester City box. Luke Shaw won the ball back for us time and time again but looked tired late on.

Fred 8 – Energetic midfield performance. Wanted the ball but didn’t do anything spectacular with it. Did retain possession for us in front of the back four.

Scott McTominay 7 – Some nice tidy passing in his own half. Ventured forward on occasion. Committed a few fouls.

Paul Pogba 7 – Never looked like taking the game by the scruff of the neck and being our match winner today. Some decent passes but not enough over the course of 90 minutes.

Bruno Fernandes 8 – Our most influential attacking player. Bruno Fernandes looked like he wanted to score today but never had a clear sight of goal. Created a couple of chances. Faded out towards the end.

Mason Greenwood 7 – Was good out of possession in terms of closing down City players and winning the ball back occasionally. Never looked like scoring though.