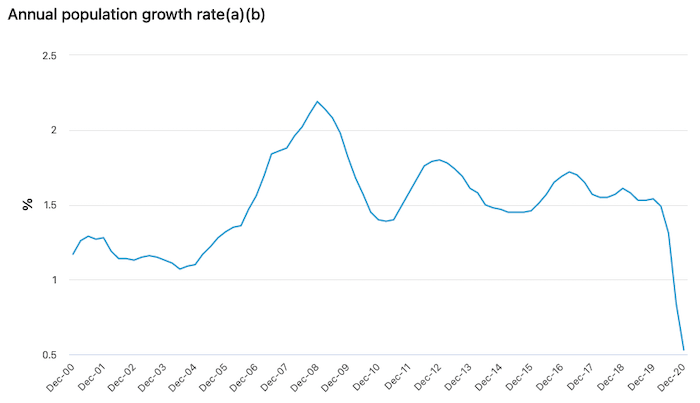 In the aftermath of the 1991 recession, which was the worst economic downturn in Australia since the Great Depression of the 1930s, I wrote a series of articles that we published in academic journals. In part, they were theoretical pieces that conjectured about the impact of rapid population growth on the labour market, which at the time was characterised by persistently high unemployment and rising underemployment (the recession had replaced full-time with part-time work). My conjecture was that high rates of immigration at a time of slow employment growth would lock unemployed workers into long-term unemployment. Of course, I could not test that proposition because the government maintained the relatively high immigration levels and other factors might have been responsible for the rising long-term unemployment. Last week’s Australian Labour Force data showed that unemployment and the unemployment rate has fallen rather quickly in recent months as the economy recovers slowly from the pandemic recession. Historical comparisons show the unemployment response this time has been much larger than in the previous recessions. The other key point is that the working age population has grown at historically low rates as a result of the border closures. It seems that my conjectures in the early 1990s were correct, despite getting flack at the time from mainstream economists who were pushing the line that immigration is always good for the labour market.

In the aftermath of the 1991, the federal government was under pressure to reduce the high immigration levels to ease the supply of workers and allow the pools of unemployment to dissipate as the economy struggled to recover.

The claimed that (quoting from that 1993 article):

1. Immigrants were “more mobile and more willing to accept stigma-laden jobs” but the evidence refuted that claim.

2. “By bringing in skills which are in short supply, migrants increase growth and stimulate competitiveness” – yet, at the time there was no evidence of skills shortages in the skilled labour market.

Which led me to write that:

I referred to another paper I had presented at the time to the ‘Second National Immigration Conference’ entitled ‘Skilled immigration and long term unemployment’.

Further, the pro-immigration lobby never really considered the problem of long-term unemployment, which became very visible during the 1991 recession.

Drawing on my doctoral research (on buffer stock dynamics), I wrote that “with expansion, unemployed workers will be offered employment, with on-the-job training opportunities attached. In addition, entry positions will be available for young, inexperienced persons leaving formal training.”

So it was critical to allow these dynamics to work effectively in an environment of relatively slow employment growth.

If a recession overlaps graduations, the most recently trained persons will be preferred to the pool of unemployed remaining from previous years.

If firms use migrant labour instead of training the local unemployed workers, then the long-term pool of unemployed remains above the levels that might normally follow the upgrading process.

I then provided some data analysis to support these conjectures and while the evidence was strong, I could obviously not conduct a counter-factual experiment because migration levels were high and on-going.

I mainly showed that there was an excess supply of skilled trades’ workers already available to the labour market, which was a contribution to the debate at the time.

In 1996, I published a related article – Why high levels of net migration present problems for unemployment and external debt stabilisation (published in People and Place, (Vol 4(1), pp. 40-46).

This was the result of further research I had been doing – which was one of several strands of research I was pursuing at the time.

I was trying to provide an evidence base to counter the relentless lobbying of the Business Council of Australia for increased rates of migration as a means of putting downward pressure on wages in the Australian labour market.

Their argument centred on the continued existence of skill shortages, which wer undermining economic growth.

At the time. unemployment remained very high and underemployment had become a major problem.

I argued in that article that “two key economic policy objectives of the Federal government are not compatible with the current immigration policies being pursued”.

First, the Federal government was trying to reduce the unemployment rate.

Second, they were worried about the growing external deficit.

I noted that the Long running debate about whether “Immigration promotes the deterioration in the unemployment rate” was largely unresolved.

It came down to whether increases in the labour supply outstripped the labour demand affects promoted by the increased spending that new entrants provided.

They had been no definitive study on that question.

Whether migrants add enough to aggregate demand to ensure the labour force growth they promote is absorbed is moot.

The point that the subsequent empirical work presented in the paper showed was that the likely labour force growth would be too strong, under current immigration policy, and feasible productivity growth assumptions, for the projected GDP growth rates to reduce unemployment.

In other words, long-term unemployment would rise because of the immigration impacts on labour force growth.

Now we can see the impact of reduced immigration

With the external border closures since March 2020 we now have a situation where immigration rates are at all time lows.

In their media release – Population growth slowed due to falls in overseas migration – the ABS stated that:

The following graph is from the ABS site:

I indicated that this flattening out has forced employers to work harder to get workers and is one of the reasons unemployment is falling quite quickly, given the circumstances.

The changing unemployment responsiveness to immigration

Now we can see more definitively the impact of the slowing population growth has on the ability of the labour market to absorb unemployed workers back into productive employment following a recession.

I went back to the three major cyclical downturns since the modern labour force data series began (February 1978) for Australia.

I then found the employment troughs in those recessions and examined the period of recovery afterwards for 20 months in each instance.

The following graph shows the relationship between monthly employment growth (horizontal axis) and the change in unemployment (vertical axis) for each of these periods, denoted separately by different coloured and shaped markers.

The number next to the x measures the responsiveness of the change in unemployment to the employment growth.

A larger number means the responsiveness is higher.

In each case, the slopes of the lines are negative as one would expect. Rising employment growth reduces unemployment.

But the respective slopes (measured by the number next to the x in each equation) show that the 1982 and 1991 responsiveness was very low.

It took a long time to reduce the unemployment rates (and they never came back down to the full employment levels).

The GFC downturn was different because the fiscal stimulus really prevented Australia from enduring a recession. There was a slowdown and unemployment did rise (as has never returned to the pre-GFC level).

But the responsiveness increased during this ‘recovery’.

However, the current recovery is very different – the slope of the blue line (and number on the x variable) is several times larger than the 1982 and 1991 recessions.

The major explanatory factor is the record low growth in the working age population as a result of the border closures.

A similar tale, although with the added complexity of cyclical participation adjustments (which I won’t go into today).

I was reminded yesterday that the Black Death also had positive impacts on (some) workers.

The Encyclopedia Brittanica analysis of the – Effects and significance – of the Black Death tells us that:

A more lasting and serious consequence was the drastic reduction of the amount of land under cultivation, due to the deaths of so many labourers. This proved to be the ruin of many landowners. The shortage of labour compelled them to substitute wages or money rents in place of labour services in an effort to keep their tenants. There was also a general rise in wages for artisans and peasants. These changes brought a new fluidity to the hitherto rigid stratification of society.

In the EH.net article – The Economic Impact of the Black Death – notes that it was the “Black Death’s socioeconomic impact stemmed, however, from sudden mortality on a staggering scale”.

The major impact was on the agricultural sector where 90 per cent of the labour worked.

Before the plague, rising population had kept wages low and rents and prices high, an economic reality advantageous to the lord in dealing with the peasant and inclining many a peasant to cleave to demeaning yet secure dependent tenure …

Ultimately, the plague ended serfdom in Western Europe and the manorial system, which had already been struggling, was destroyed.

A whole range of other beneficial consequences occurred.

The research by Jane Humphries and Jacob Weisdorf – Unreal Wages? Real Income and Economic Growth in England, 1260–1850 – (published in the Economic Journal, Vol 129, Issue 623, October 2019, pp. 2867-2887) demonstrates, that males fared better than women during the plague in terms of wages growth and jobs.

The hope is that the tighter labour supply conditions will drive unemployment down much lower given that it is unlikely the external border will open until at least mid-2020.

The border closure will endure because of the disastrous vaccination strategy of the federal government and it is highly unlikely that the Australian population will be fully vaccinated before the first quarter 2022.

The other hope is that the tighter labour supply conditions will drive up wages as occurred during the Black Death.

Reflecting back on work I did in the 1990s on these sorts of issues, which was subjected to widespread criticism from the mainstream economists, in one way, it is good finally to be able to see that the my conjectures had substance.

But, what I have written today should not be taken as an anti-immigration stance. Far from it.

The problem is that governments have not been prepared to use their fiscal capacity to ensure everyone has a job and so the labour supply has outstripped labour demand.