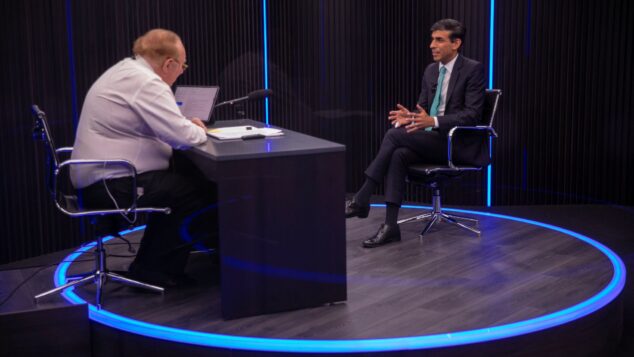 Face the press: Rishi Sunak being interviewed on GB News by Andrew Neil

Rishi Sunak, the chancellor, expects the Long-Term Asset Fund announced last November to launch before the end of 2021.

The Long-Term Asset Fund will enable pension funds to funnel some of its mooted £500bn capacity into venture capital, enabling pension funds to invest more in start-ups and growth businesses.

Announcing the Long-Term Asset Fund in his November financial services statement, Mr Sunak said that it would “encourage UK pension funds to direct more of their half a trillion pounds of capital towards our economic recovery”.

Speaking to this week’s Twenty Minute VC podcast the chancellor said that historically UK pension funds have not done nearly enough to support the UK’s start-ups compared to pension funds in other countries.

Mr Sunak told the podcast: “We’ve either the second or third-largest pension fund industry in the world. When you benchmark against the US, historically we underinvest in liquid assets such as venture capital and private equity.

However, he warned that “VC returns are lumpy. It’s hard for governments to change the pension fund culture”.

The chancellor admitted that the Treasury underestimated demand for the £500m Future Fund, designed to get government matching venture capital in investing in start-ups. The government has committed an initial £250m in funding towards the scheme, which was fully used up on its first day of opening.

Mr Sunak said: “We moved quite quickly and worked with industry. But we underestimated the demand for the product, so our market analysis was a bit off, so we had to upsize because people were worried it was going to run out.”

Mr Sunak said: “We probably won’t know whether we got the balance right or not in terms of size of companies that could apply for a couple of years.”

The chancellor said that yes, the Treasury did not get all of its emergency Covid-19 financial support schemes working properly right out of the gate, but the Treasury was not unafraid to iterate – a start-up culture mentality which he has tried to encourage in government.

Mr Sunak compared the “fail fast” culture of Silicon Valley – he studied for his MBA at Stanford University – with how the Treasury had to respond to the Covid-19 pandemic.

Mr Sunak said: “Some of our loan schemes didn’t work on day one but I said we’re going to iterate to get them working. We’re always trying to learn from our mistakes. We’re constantly iterating policy, which is a novel approach in government.

“Was every policy idea brilliant? Probably not. But we were making policy in a crisis without knowing what was going to work.”

Mr Sunak said that the number one problem for venture capital and start-ups in Britain is attracting talent. He pointed to the overhaul of the UK’s visa system for attracting talent, such as broadening the talent definition for the scale-up visa and expanding the Global Entrepreneur Programme where the UK will talent scout tech talent at world-class universities.

Mr Sunak said: “If we can do all these things, we can say that we’re the most attractive country for attracting those fast-growth businesses. I want this to be the best place for people to come. I want to attract the best and brightest.”

Mr Sunak also pointed out that when it comes to UK entrepreneur selling their unicorn start-ups – businesses valued at over $1bn – that the 20 per cent capital gains tax (CGT) rate in Britain compares favourably with nearly 30 per cent in France and 37 per cent in California.