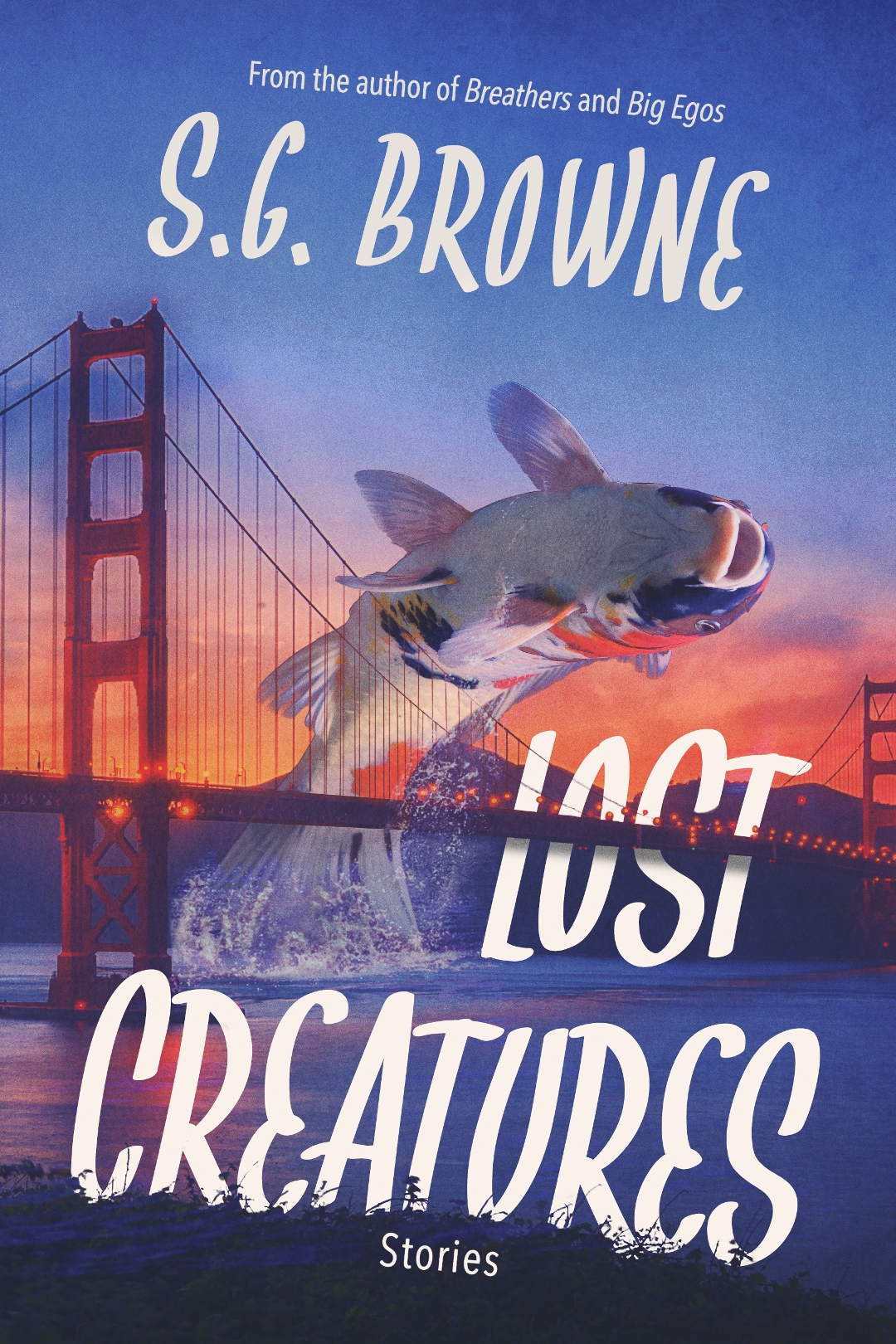 A family of luck poachers receives a phone call that sets them off in the hopes of reversing their bad fortune. At a singles mixer for chemical elements, a luminous-yet-jaded Neon looks for love, or at least a one-night exothermic reaction. When blue skies turn gray and the daikaiju siren blares, the ten-year-old daughter of the local weatherman discovers her destiny. And washed-up evildoers live out their meaningless lives at a retirement home for villains—you never know when someone might turn the swimming pool into a shark pit, or bring a death ray to Taco Tuesday.

From the imagination of S.G. Browne comes a collection of fourteen short stories of downtrodden luck poachers, lovelorn chemical elements, obsolete villains, disillusioned children, trademarked teenagers, outcast reindeer, victimized zombies, and time-traveling alcoholics—many of them lost and searching for answers. Some of them find what they’re looking for, while one or two discover that childhood dreams can come true.

You can learn all sorts of interesting (and often useless) information when you write a short story about the pandemic, incorporate the internet meme “The earth is healing, nature is returning” into your story, and end up reading a bunch of articles about mythological creatures and going down the proverbial research rabbit hole.

The genesis for the leprechaun sanctuary started back in 1989 when P.J. O’Hare, a local pub owner, claimed he found evidence of a leprechaun after hearing a scream near the wishing well on Slieve Foye, the mountain that overlooks Carlingford. When the pub owner investigated, he found small bones, a tiny green jacket and pants, and a handful of gold coins surrounded by what appeared to be scorched earth. I have no idea if there were any other witnesses. But the clothes are apparently on display at PJs Pub in Carlingford.

The discovery sparked The Carlingford National Leprechaun Hunt on Slieve Foye, with thousands descending on the mountain to search for leprechauns. While many of the locals embraced the surge in visitors and the increased revenue it brought to Carlingford, they wanted to make sure to protect the little people and their habitat, as it was believed that 236 leprechauns lived in the caverns of the mountain. I have no idea why or how they arrived at 236 rather than a nice round estimate like 250. I’m just the messenger.

Finally, in 2009, twenty years after the discovery of the leprechaun’s remains, the European Union granted official heritage status to the leprechauns who lived in the caverns of Slieve Foye, declaring the mountain and all of its inhabitants, animals, and flora a designated area of protection under the EU’s Habitats Directive.

So who wants to go to Carlingford?

I received a C in my freshman college chemistry class. I aced high school chemistry and was a straight-A student going all the way back to 1st grade. So getting a C during my first semester at college came as somewhat of a shock. It probably had something to do with the fact that in high school, I wasn’t staying up late three nights a week playing drinking games in my dorm room. It didn’t help that my chemistry class was at eight in the morning on Friday and Thursday night was a big party night.

I didn’t retain a lot of information from my college chemistry class. Go figure. But even had I not been hungover in class on a regular basis, I’m pretty sure my college chemistry professor never mentioned how chlorine and fluorine are two of the more promiscuous elements of the periodic table.

Fluorine has formed compound bonds with nearly all of the other elements. Like all halogens, Fluorine only has nine electrons. In periodic table parlance, she’s one electron shy of a full shell. Not to mention she’s highly toxic. So caveat emptor. Chlorine, meanwhile, has, at one time or another, hooked up with nearly all of the other elements, which is surprising considering he’s toxic, gassy, and irritating. But who am I to judge?

When it comes to chemical promiscuity, Hydrogen isn’t much better. It doesn’t matter if you’re noble or poor, stable or monoatomic. If you’re ionizing, Hydrogen is synthesizing. So if you’re looking for a serious relationship, he’s not exactly husband material. Carbon, meanwhile, has two stable naturally occurring isotopes and is capable of forming multiple stable covalent bonds, which makes him more of an ideal candidate for a long-term relationship. Although when it comes to monogamy, he’s not exactly a paragon of virtue, having formed more compounds than any other element.

If you’re not interested in making a commitment or forming any kind of lasting bond, there are plenty of chemical elements who are just looking for a one-night exothermic reaction. But it’s probably best to avoid Technetium and Promethium, since neither one of them has any stable isotopes. The last thing you want is a stalker.

I Enjoyed Exploring My Feminine Side

Prior to writing the majority of the fourteen stories that comprise LOST CREATURES, I wrote nine novels, one novella, and four-dozen or so short stories. I don’t mention this to boast or humble brag, because there are countless writers who have written and published far more stories and novels than I’ve ever imagined. I mention my writing history to emphasize that although my novels and many of my short stories have featured prominent female characters, none of those characters played the role of the main protagonist. So the majority of my writing was male-centered and told from the male POV, which, over the past two decades, has been almost exclusively in the 1st person.

Then I was introduced to the short story collections of Karen Russell and Kelly Link.

Not that I hadn’t read books or stories written by female authors before, but none of them had inspired or compelled me to shift my perspective when it came to my characters and how I wanted to tell my stories or who I wanted to tell them. Not to mention the type of stories I wanted to tell. It brought more balance to my writing and I found myself exploring ideas and stories and characters that I never would have considered writing about before because they wouldn’t have worked as well, or at all, when told from a male POV.

So while half of the stories in LOST CREATURES have a male protagonist, the other half are told from the POV of a female—including a ten-year old Japanese girl concerned about daikaiju ruining her weekend plans, a college-aged zombie taking remedial English classes, and a mother reminiscing about the pet centaurs she raised as a child. Most of the stories are told in the 1st person POV, which allowed me to spend a lot of time in the female perspective, seeing the story and the world through a different set of eyes than I had so often told most of my stories. And these stories turned out to be some of my favorite stories I’ve ever written.

By the way, if you’ve never read anything by Karen Russell or Kelly Link, I highly recommend it.

Writing Short Stories Helps Me To Find My Happy Place

The thing they don’t tell you about being a writer is that there are times when it can become a grind, sucking all of the joy out of the creative process. Not that writing is always fun. The business side can be a time suck when all you want to do is sit down and write. But sometimes it’s a challenge to be creative, to write words that you’re happy with, to craft sentences and paragraphs and scenes that make you think, “This is what I was meant to do. This is my jam.”

That’s the sweet spot that writers look to hit. And when we’re lucky, we hit it. But other times it can be tedious, like when you can’t figure out how to fill a plot hole in your novel or when one of your characters starts doing things that don’t make any sense and you shout at your computer, “What the fuck, Timmy?”

When the story isn’t working no matter how hard you try to make it work, especially when you’re on a deadline and you have to find a way to make it work, that’s when the joy of writing becomes a panic-filled grind. Because if the story isn’t working for you, chances are it’s not going to work for anyone who reads it. And that’s worse than anything Timmy was doing to piss you off.

And then there are the times when you’re not writing to fulfill yourself but in order to fulfill a contractual obligation. It happens more often than you’d think. Sometimes the business of writing becomes more about the business than it does about the writing. And that sucks.

When writing becomes a grind for me, when my novel isn’t working or I find myself writing something for the wrong reasons, I write short stories. They’re my way of exploring ideas that matter to me without having to worry about a deadline or a contract or if my agent or editor will like them. I write them for me. I write them for fun. And I write them without the constraints of expectations about whether or not I can sell them. It would be nice if I could. But that’s not why I’m writing them. I’m writing them for the pure joy of writing. To remind myself that writing can be fun. To remind myself why I started down this path in the first place.

Compiling A Short Story Collection Is Like Being A Literary DJ

Over the years, I’ve made my fair share of mixtapes and am old enough to have made some on actual cassette tapes. I still occasionally make mixtapes on CDs (although you could argue that it’s technically a mix-CD). But I’ve always enjoyed the process of compiling songs and putting them together to create a specific experience for the listener. I even had a brief side gig as a substitute DJ in 1990 while living in Los Angeles, spinning records Friday nights at Alzado’s Restaurant & Bar in West Hollywood. Alzado’s liked their rock and roll on the classic side, which was right up my musical alley. But you still wanted to spin a good mix of tunes that would keep the energy going and the customers happy.

To me, short story collections are like literary playlists and the writer is the DJ, spinning tales to create a rhythm and flow to keep the energy going and the reader engaged. I can’t speak for other writers, but when I compiled LOST CREATURES, I put the stories down in a specific order, moving them around until I found the right flow, with the idea that reading the collection from start to finish would give the reader an experience they wouldn’t get by jumping around from one story to another. Not that there’s anything wrong with that, but it’s just not the experience I intended for the reader to have.

So LOST CREATURES is my literary mixtape. My Friday night DJ gig. But instead of spinning songs, I’m spinning stories, trying to create the right mood and rhythm in the hopes that the reader sticks around until last call.

S.G. Browne is the author of the novels Breathers, Fated, Lucky Bastard, Big Egos, and Less Than Hero, as well as the short story collection Shooting Monkeys in a Barrel and the heartwarming holiday novella I Saw Zombies Eating Santa Claus. He’s also the author of The Maiden Poodle, a self-published fairy tale about anthropomorphic cats and dogs suitable for children and adults of all ages. He’s an ice cream connoisseur, Guinness aficionado, cat shelter volunteer, and a sucker for It’s a Wonderful Life. He lives in San Francisco.