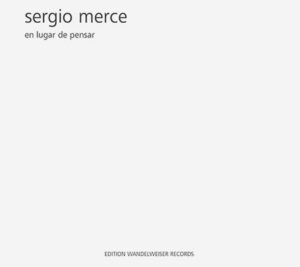 “The name of the album is about this feeling that I have. I believe that playing music is a non-cerebral thought form; thought in the sense of being a channel to see, to reveal, a channel that opens through intuition, observation and attention but not through thinking.”

Argentinian composer Sergio Merce frequently records at home, but the results aren’t rough hewn as a result. Employing a microtonal saxophone of his own design, synthesizer, and an electronic wind instrument, Merce creates music that encompasses drones, layered sine waves, complex overtones, and periods of silence. The first piece, “Forma Circular” is an enclosed shape. It repeats twice on the recording. Often, a single interval is isolated for a period of time, to be followed by silence and then a more complex, microtonal sonority. An additive process of building from a simple interval to a stack of harmony is another common approach in the piece. Partway through, pitched pulsations animate the soundscape, moving the proceedings from a prevailing feeling of stillness to a mid-tempo presentation. Even when it is absent at the beginning of the second pass through the form, a subliminal urgency is still felt.

In “Forma Continua,” straight tone intervals are morphed with microtonal beating. Single sine tones act as interludes between each wave of distressed dissonances. Merce prioritizes seconds among the intervals, but nearly each one gets to take a turn at being central to the music. Silence plays less of a role than sustain in this piece, with one attack beginning while another sustained chord is held. At times the instruments are recognizable as distinct entities. At other points in the piece their textures overlap, creating beautiful blurred sounds. Merce’s hand-fashioned instruments and home recording practices are in service of sophisticated music-making.