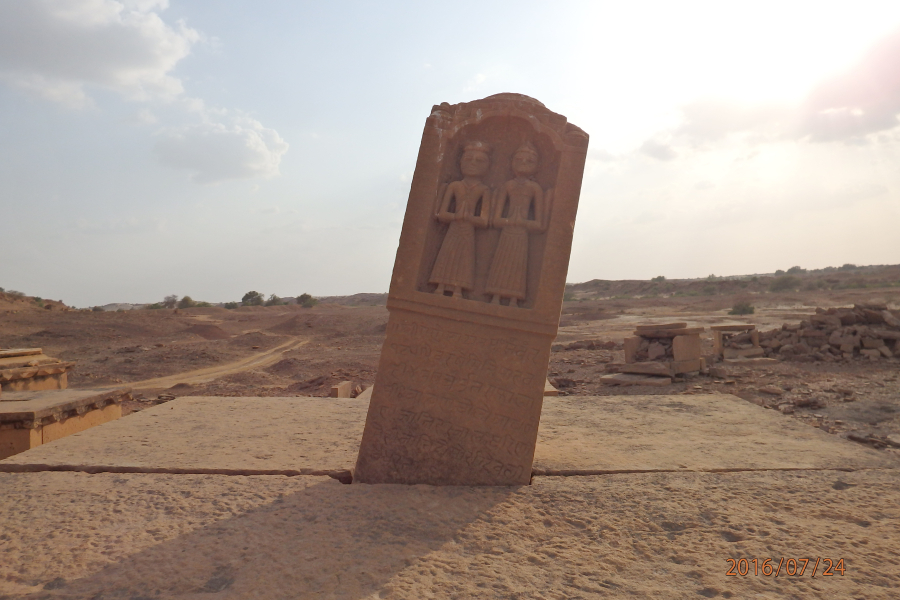 Beauty, it is said, lies in the eye of the beholder. And therefore, we choose to see it only in certain places. For instance, when it comes to monuments, we find beauty in palaces and temples, but rarely in tombs, cemeteries, or burial grounds.

The artistry of burial grounds is often overlooked owing to the taboo attached to death.

One of India’s most visited monument, the Taj Mahal, is, in fact, a tomb. This detail is regularly overshadowed by its magnificence and popularity as a symbol of love.

Though not as magnificent, many Indian cities are also dotted with intricately designed tombs that echo tales of love, respect, sacrifice, and reverence.

Here are six burial grounds in Inda that you can visit and soak in their haunting beauty.

Even before the British laid their eyes on India, Surat was a thriving trading hub. During the 16th century, the Dutch and British vied for control of this port city, trying to get the bigger share of the trade. This was evident from the cemeteries they built, which today lie desolate, yet tell tales of their owner’s grandeur and power.

Intricately designed tombs heavily inspired by Mughal architecture adorn a side of the road in the Katargam area of Surat. Located close to each other, the English and the Dutch (and Armenian) cemeteries hold about 400 big and small tombs.

Among the most striking are those of George Oxenden, the first company Governor of Bombay Presidency, in the English Cemetery, and Hendrik Adrian Baron Van Reede, a director of the Dutch East India Company, in the Dutch Cemetery.

In Agra, there is no dearth of grand and aesthetically pleasing monuments that are frequently abuzz with locals and tourists alike. However, to the surprise of some, it also has a calm oasis away from the crowds. A home to alluring memorials, it recites stories of love and sacrifice.

The Roman Catholic Cemetery, located on the Dayal Bagh Road, is the oldest in North India. Adorned with obelisks, cupolas, and pillars, many of the tombs here have an undeniable Mughal influence. It is the final resting place for Armenian merchants, European soldiers, and Jesuit priests.

Among them, the tomb of Col. John William Hessing, a Dutch soldier who fought the British, will draw your attention instantly. Built-in his memory by his wife, it is modeled on the Taj Mahal and made out of red sandstone. The only thing missing are the minarets, which couldn’t be completed owing to financial constraints.

Owing to its location on the silk route, many traders made Jaisalmer home. Evidence of its popularity and economic power can still be found within its fort and intricately designed Havelis. The Paliwal Bhramins was a community that rose to power in the field of crafts, farming, and opium trade.

Jaisalmer is surrounded by ruins of several villages that were said to have been inhabited by this well-to-do community. The town of Kuldhara and Kabha are a few which can be visited to get a sense of what life would have been then. About 5kms away are the burial grounds of this community that thrived around 400 years ago.

While the royal cenotaphs of Bada Bagh near Jaisalmer are frequented by many, these located in the hinterland go unnoticed. Though modest in design, they are adorned with traditional carvings, with some also conveying the practice of Sati. Some tombs also depict Egyptian or Phoenician symbols indicating that some foreign traders were also buried alongside the Paliwals.

Maintained by the Commonwealth War Graves, the Kohima War Cemetery lies on the battleground of Garrison Hill. It was here a small Commonwealth force stopped the Japanese advance in 1944.

This terraced cemetery overlooking the city of Kohima, the capital of Nagaland, holds 1420 graves of soldiers. These brave men sacrificed their lives during the Second World War. At the highest point is a memorial dedicated to 917 Hindu and Sikh soldiers who were cremated in accordance with their faith.

Giving a 360-degree view, the cemetery and its beautifully manicured garden lend an aura of calm and tranquillity to the place, which ironically saw one of the fiercest battles during the Burma campaign.

As you leave Bidar, driving past Dulhan Darwaza towards Ashtur, the magnificent Bahamani tombs are hard to miss. Their grandeur will attract you at first, but the exquisite Persian craftsmanship is the highlight when you view them closely. These are fine examples of Indo-Saracenic architecture.

This Royal necropolis houses twelve graves of the Bahamani Sultans and their family. Though largely neglected, there is a lot of history echoing in ruins. Humayun Shah’s tomb is most dramatic as it is cut in half due to a lightning strike revealing the interiors as a cross-section.

Among the most well preserved and revered is the tomb of Ahmad Shah Wali. As you step inside and adjust your eyes to the darkness, the interiors reveal their glory. The walls decorated in colorful geometric patterns, floral designs, and calligraphed Sufi verses are a sight to behold. Although some of the paintings are dulled with time, they give a peek into this dynasty’s past glory.

In the quest to find beauty in unusual places, one cannot miss the South Park Street Cemetery in Kolkata. Closed for use in 1840, its ornate tombstones and obelisks are akin to a time capsule. The epitaphs reveal engaging anecdotes about the life and times of the people buried here.

With over 1600-remains of British men, women, and children, it is one of the largest of its kind in Asia. Though overgrown with flora, the tombs here retain their fine Gothic and Indo-Saracenic architecture.

South Park Street is the final resting place of many notable residents of those times. Among them, the most revered and well maintained is the tomb of Sir William Jones. Apart from being the founder of the Asiatic Society, he made key contributions in establishing a relationship between European and Indo-Aryan languages.