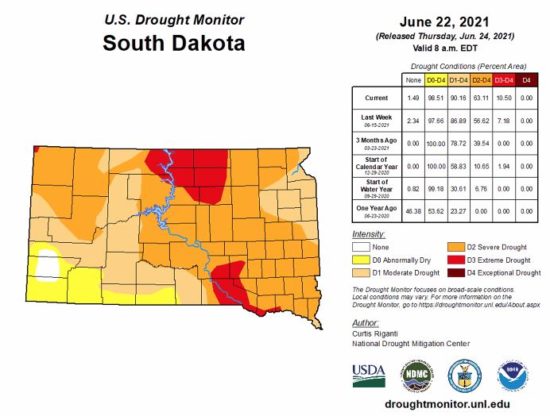 The extreme heat in the first two weeks of this month have made drought conditions worse in South Dakota, stressing crops and livestock.

State Extension Climatologist Laura Edwards says there have been small improvements in some areas but for central and far western South Dakota, the over 100-degree days have made dry conditions far worse.

There have been a couple tenths-of-an-inch of rain in eastern South Dakota.

“That’s kind of helping us tread water, at least on the corn and soybean side but I know other crops are already really struggling and/or have been already at a significant loss if not total loss.”

Edwards says there’s a premature ending to the wheat crop where in central and north-central areas especially it’s being cut for hay.

As for corn, she’s worried about the weeks ahead, saying, “Conditions are not looking great for good pollination,” and not just for South Dakota.

She says 99% of South Dakota is in some form of drought and the near and longer term forecasts do not show improvement.