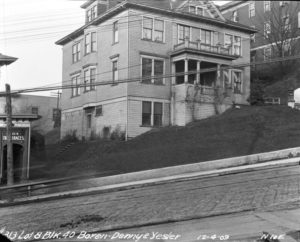 Washington’s new bill will “increase housing unit inventory by removing arbitrary limits on housing options.” In plain English, what that means is that groups of people who aren’t family will be allowed to live together. Washington is one of many states with old laws on the books prohibiting such living arrangements — a vestige of zoning regulations aimed at prioritizing the nuclear family and limiting the availability of affordable housing through boarding houses. In their zeal, however, such laws put an end to a useful urban housing model: affordable dwellings shared by strangers, a form that’s perfect for today’s housing-stressed cities.

Boarding houses and SROs [single room occupancy] used to be very common in the United States. In the 1800s an estimated one-third to one-half of urban residents either hosted boarders or were boarders themselves. This style of housing accommodated a quadrupling of the American population over the 19th century, and enabled people to live affordably enough in walking distance of daily needs and amenities.

But throughout the second half of the 20th century, these housing types gradually disappeared as a result of zoning that prioritized single-family housing, and explicitly made these housing types illegal. While racist practices like redlining prevented people of color from buying homes in white neighborhoods, policies banning group living were likewise intended to keep white, single-family neighborhoods out of reach of certain groups: people of color, lower-income extended families, groups of friends, or single laborers. It didn’t help that the only SROs or boarding houses that continued to operate were often in disinvested urban areas.

I had experience with both SROs and boarding houses in the early 1970s, both quite positive.

In late May 1970, after graduating from the University of Winnipeg, I hitchhiked from Winnipeg across Canada to Vancouver and down to Los Angeles, stopping along the way to visit existing friends and new friends. (One of my friends called this my “libertarian pilgrimage.”) The new friends tended to be libertarians I had heard about or read. In  San Francisco I didn’t know anyone and I thought that asking one libertarian woman I met if I could sleep on her couch was too forward. So I found a divey San Francisco hotel and paid $5 or $6 a night for my own room without a bathroom: the bathroom was a shared facility down the hall. I did the same in Los Angeles.

In the summer of 1973, after I had spent one year in the Ph.D. program at UCLA, I was a summer intern in Nixon’s Council of Economic Advisers, working under Herb Stein. I wanted to save as much money as I could to help pay for living expenses at UCLA. I had heard about a Harvard undergrad named Larry Siskind who was heading something called the “Libertarian Task Force.” He, the people who worked under him, and a few other libertarians and conservatives (one worked as an intern for columnist Jack Anderson and one worked in Vice-President Agnew’s office) were renting a divey house on East Capitol Street. I asked if I could join them and pay a modest rent. Larry accepted and I shared a room with a guy named Steve Beckner. It was cheap housing and lots of fun.

Allowing such housing would help a lot of people who want to move to a city and take a new job.