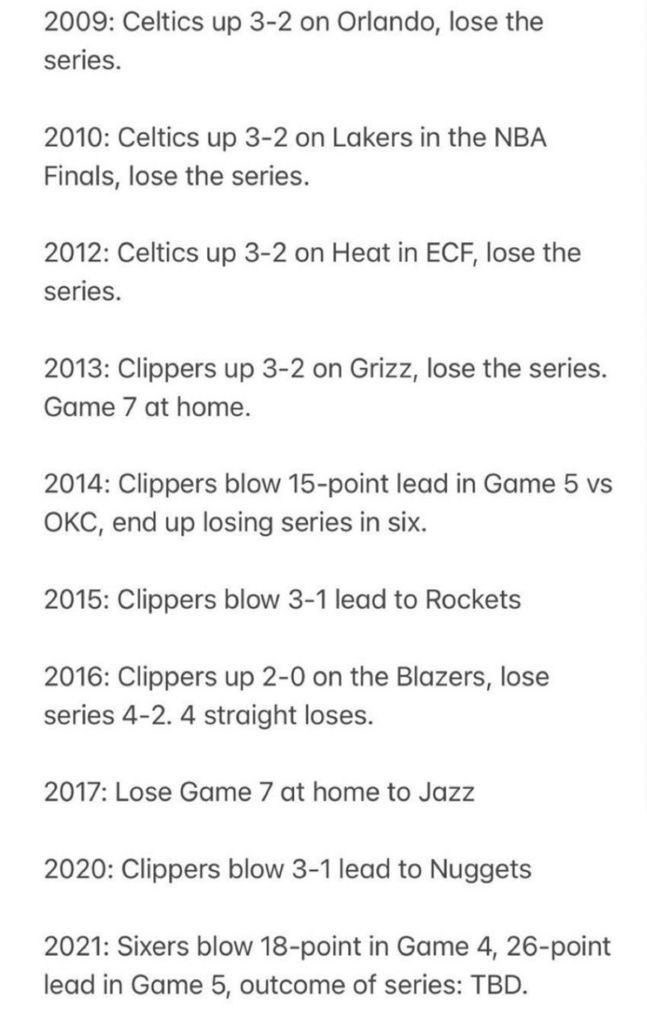 When there’s smoke, there’s fire, and Doc Rivers can’t put it out.

The fire burned all night in Philadelphia after the Sixers lost Game 5 to the Atlanta Hawks, 109-106. At one point, the Sixers led by 26 (!!!) points, but the Hawks finished the game on a 40-19 run to take control of the series at three games to two.

This marks two-straight games where the Sixers led by more than double digits in the second half. The Sixers blew an 18-point lead in Game 4 to lose 103-100.

What went wrong? Joel Embiid had a monster night of 37 points and 13 rebounds, but he continues to run out of gas in the fourth quarter due to an injured knee. Ben Simmons has been getting dragged for almost 24 hours after shooting 4-14 from the free-throw line. Simmons took zero (0) shots in the fourth quarter. Simmons is a liability at the end of games because he can’t shoot. It’s that simple.

I didn’t forget about Tobias Harris, the $180 million dollar man who scored 4 points total in Game 5. Besides Embiid, only Seth Curry, who scored 36 points, realized that it was Game 5 in the Eastern Conference Semifinals, not Game 3 of the regular season.

A lot, and I mean a lot, of things went wrong on the court. However, there’s one man who’s grown accustomed to losing big leads. There’s one man who is the only coach in NBA history to blow three 3-1 series leads.

The man I’m referring to is Doc Rivers.

There’s no denying Rivers’ success and likability in the NBA. Rivers will most likely end his career with a trip to the Basketball Hall of Fame. Maybe that doesn’t mean as much since the Hall is letting anyone with a pulse enter, but it’s still an accomplishment.

Rivers won the NBA Championship with the Boston Celtics in 2008 and won Coach of the Year with the Orlando Magic in 2000. Rivers led four separate teams to the playoffs and he’s 10th on the all-time coaching wins list. To quote Denzel Washington in Remember the Titans, “You’re a Hall of Famer in my book.”

Unfortunately, Rivers’ shortcomings in the playoffs have become an all-too-common occurrence. If Rivers coaches a team, blown leads will follow. Whether that’s fair or foul doesn’t necessarily matter. It’s the truth.

The noteworthy collapses are the aformentioned 3-1 series leads. Of the 13 times a team recovered from a 3-1 series deficit to win the series, Rivers has been on the losing end for three of those 13 instances.

If those were Rivers’ only blemishes, then so be it. However, bad losses have followed Rivers throughout his coaching career. Deep Sran captured Rivers’ notable losses since 2009.

Once is an accident, twice is a coincidence, and three times is a pattern. What’s the saying for over ten times? 11 times means it’s inevitable?

It’s not all Doc’s fault. He can’t teach Simmons how to shoot free throws mid-game or improve Embiid’s conditioning this late in the series. But blowing this many games is ridiculous.

I respect Doc for calling out the effort of his players after Game 4, but maybe it’s time to call yourself out for blowing double-digit leads on your own court and losing multiple Game 7s at home. The endings to Games 4 and 5 were almost identical. Doc’s lack of adjustments in the fourth quarter and his team’s inability to finish games is unacceptable.

Can the Sixers still win this series? Of course, they can, but the Sixers and more importantly, Doc, need to learn how to finish games or their season will end in disappointment.

Is Doc Rivers to blame for Philly’s collapse? Leave your thoughts in the comments below or tweet us, @unafraidshow.