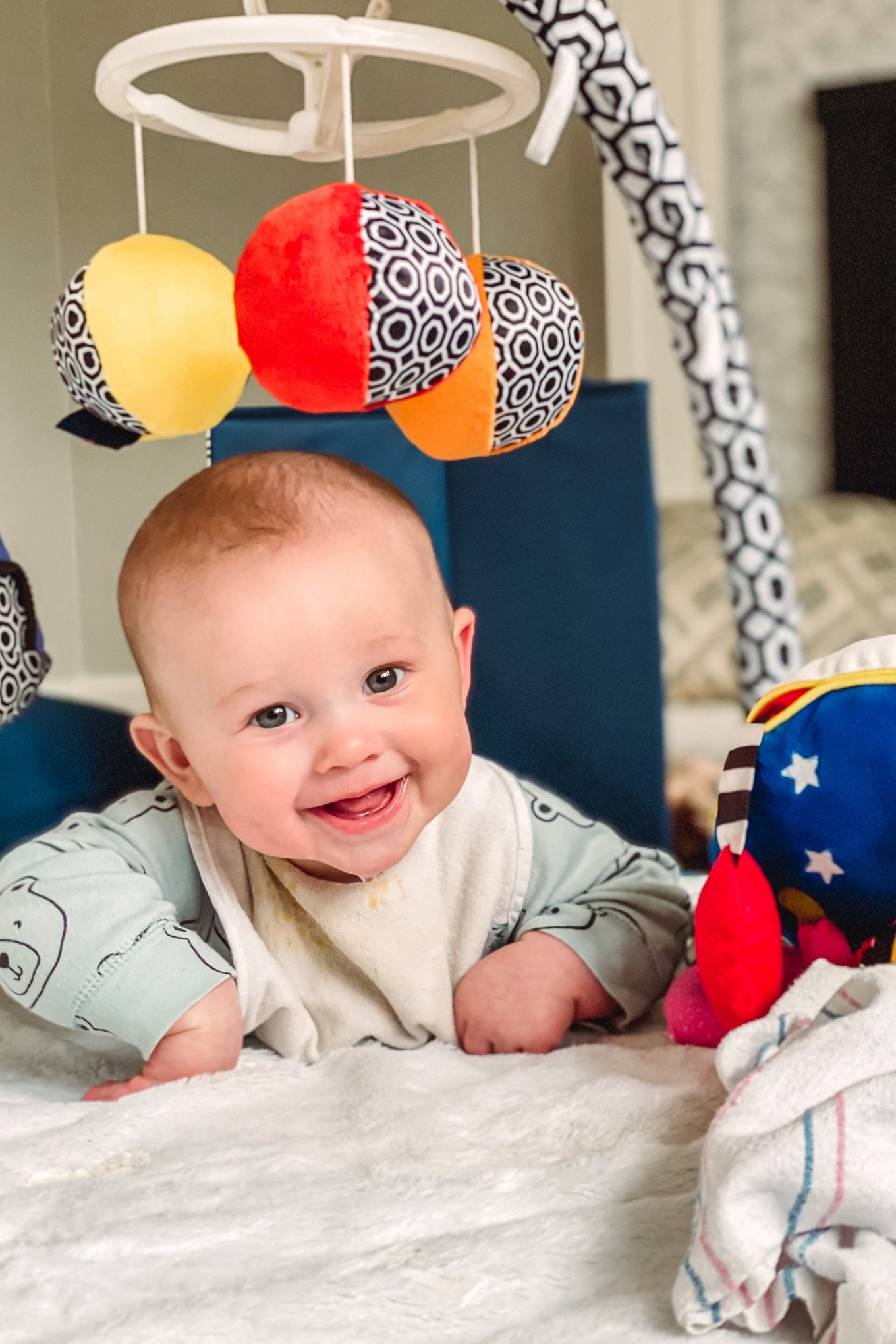 When Levi’s doctor told us he had “classic colic” at his two-month appointment and followed it up with a solemn, “It will probably get better in two to three months…,” I nodded along to somehow assure her I could handle it. Of course I couldn’t handle it. Inside I was thinking TWO! TO! THREE!! MONTHS?!!!! I didn’t think I’d last another 2-3 days. She explained there are some things you can do to try to help but mostly you just have to…wait for him to grow out of it.

Sometimes colic is thought to be related to digestion, so we switched to a more sensitive formula. We altered Levi’s feeding schedule. We gave him colic drops, administered a probiotic, and held him upright for a long time after every feeding. We ever-so-slightly elevated one side of his crib in the hopes that it would help with reflux. And we bounced and we bounced and we bounced on that giant exercise ball until our spines were thoroughly smashed down to half the length we started with.

Sometimes colic is thought to be related to sensory stimulation (often overstimulation), so we dimmed the lights, lowered our voices, got the best sound machine money can buy, and only dressed him in the softest cotton clothing.

Sometimes they say colic is about the inability to have emotional control, so we tried to soothe him by holding, rocking, bouncing, pacing, strolling around the neighborhood, and baby wearing with three different carriers and wraps (Ergo, LILLEbaby, and the Solly wrap).

Until it suddenly stopped.

As Levi approached five months old—the hardest five months of our lives as parents—one day I looked up and said to Daniel, “He hasn’t cried much today.” Daniel said “I was thinking the same thing but didn’t want to jinx it.” We knocked on all the wood around us. But the next day was the same: quiet. Levi still needed to be bounced to sleep and kept on a regimented schedule, but the screaming-crying was gone. He would cry if he was hungry or getting too sleepy but all the other stuff, the torturous wailing for no apparent reason with no solution, stopped suddenly and completely. It was like he was finally a “normal” baby.

Now at eight months, Levi is what I would describe as a happy baby. He smiles and giggles. He is playful and joyful. He gets fussy and there are, of course, hard days, but more often than not, he cries when he needs something and is easy to comfort and soothe. It seems like he just needed time to adjust and now that he has, he is a delight.

So what fixed it? What was the miracle cure for colic?

The answer was waiting for him to grow up and out of it, which, if you’re currently in the throes of colic, is the least satisfying answer. I get it. Waiting it out, for weeks, months—forever?!—for your baby to stop shrieking for hours on end is the last thing you want to do. But the truth is, nearly all cases of colic eventually resolve on their own. People told me this very thing four months ago and it didn’t bring me much comfort. And yet here I am to pass the cold comfort on to you, because at the bare minimum, you need the assurance from someone who has been there that yes, your baby will stop crying. Eventually.

In the end, my recommendation would still be to do all the suggested colic fixes. Do the drops and gripe water. Adjust the diet and feed schedule. Try different techniques for soothing. Not because they’re likely to work, but because at least it’ll feel like you’re trying. One piece of parting advice from our doctor was, “Try everything you can. It probably won’t work, but at least it will feel like you are doing something about it.”