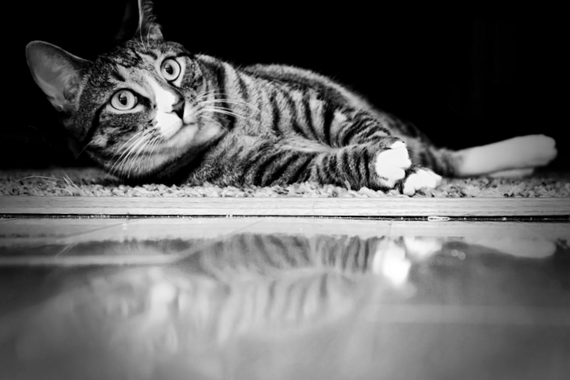 Like typical cats enjoying a lazy day, Drake, Blake, and Celie are lying on a king-size bed with an orange comforter. They are watching one of their favorite TV shows, “Too Cute: Cats.” Blake and Drake are falling asleep, while Celie, the only girl among the three, is paying close attention to the cute boy cats.

“He is one hot kitty. Me-wow!” Celie says with excitement. Drake and Blake look at the TV screen and then look at Celie with blank expressions.

“What?!?” Celie says. Sometimes Celie thinks her brothers are just out to get her. She hates being the middle sibling and hates even more that both Blake and Drake are a soft gray color. She is a mottled mix of orange, brown, white, and black.

“Heeeee is a girl,” Drake and Blake say at the same time.

“Oh, I thought I saw something. Nevermind then.” Celie says. Drake and Blake roll their eyes.

All of a sudden, they hear Wilferd, a tall, muscular, attractive 16-year-old boy yelling at his video game. Wilferd is a decent kid, but has a lot of energy and sometimes makes a lot of noise. He makes Blake, who is the oldest and rather shy, really nervous. Celie just finds him annoying. Drake, on the other hand, isn’t frightened by Wilfred at all. Wilferd received Drake as a Christmas present and they are pretty alike:  one minute laying around quietly and the next minute having a crazy outburst.

“Why aren’t you working you dumb, inconsiderate game. You are such an idiot. I HATE YOU!” Boom! Wilferd throws his Xbox 360 on the ground and begins wailing his eyes out. He holds his legs and rocks back and forth in his chair with his thumb in his mouth. He’s been bugging his parents for a new game system for months, but so far they haven’t given in to his begging.

“Uggghhhh. He must be going through super early menopause or something. He sounds like an immature baby,” Celie says.

“Hey, we should start heading out if this plan is gonna work,” Drake begins. “We don’t have forever because Wilferd is gonna lock all the windows at 9:00pm like he always does. I also don’t feel like hearing him cry all day. What do you guys think?”

“Guys, I don’t really know about this. Remember the last time we escaped and Wilferd cried for five days straight. I felt so bad that we upset him by running away. I mean, I had fun on our last adventure, but maybe tonight isn’t the best time for a repeat. And we are basically treated like kings and queens around this place. How about if we just stay here for a while and see if he calms down?”

“Shut-up blossom head!” Drake says angrily. “We’re doing this. If you don’t do this, you’re not gonna be part of the DBC Adventure Club ever again. Us leaving isn’t so bad anyway, so chill out! We’re only gonna be gone for one week. We have all the things we need, I think.”

“Alright. Do you both know the plan?” Celie questions.

“Ok then. Do you have the cell phones Drake?”

“Yes, I have the two iPhones and an iPad for me because sometimes I get bored with the two of you.”

“Whatever,” says Celie. “Do you have the money, Blake?”

“Hey wait. I need to get something really quick. I’ll be right back,” Blake says.

“Ok. Hurry up snail,” Drake says. Blake goes upstairs to Wilferd and jumps in his lap. Blake is feeling guilty for leaving and wants to make Wilferd feel better because he’s crying. While Wilferd makes Blake nervous, he had been watching him sleep since he was very young. Wilferd was cute when he slept, usually drooling a little bit. In his quieter moments, Wilferd was nice to Blake. Blake licks Wilferd’s hand and purrs very loudly. Blake finally gives Wilferd a lick on the cheek and hops off his lap. Wilferd stops crying and smiles at Blake as he trails off to meet his brother and sister. I hope he feels better. I’m glad I stopped his sadness, Blake thinks to himself. Finally, Blake meets up with his siblings and they sigh with relief.

“What took you so long, butthead?” Drake asks.

“I just had to take care of some things,” Blake answers.

“You always have to do something. How about you stay with the pack once in a while?” Drake says with anger. Drake is only two years old and often gets very impatient with Blake who is eight years older than him. Drake often finds Blake to be a drag on his style.

“Well, there are important things that can’t be left undone,” Blake says sadly.

“This is always the best part of our adventures! The fun is all ahead of us,” says Drake. They begin running down the alley, taking in all the sights and sounds and especially the smells. It takes them more than 30 minutes to go a block because there are so many interesting things to investigate.

With no warning, the skies open up and it begins to rain. Not just rain, but pour. They take cover under a thick bush, but the water finds its way down and begins to drip on their heads.

“Why are we here again? This is possibly the dumbest decision we’ve ever made. Why can’t we just go back home?” Blake asks with exhaustion in his voice.

“I have to agree with ‘stupid’ over here. This is starting to get boring…and wet,” Drake says.

“Well, since you twerps don’t wanna do anything, I’m gonna explore the city with enthusiasm, not sorrow,” Celie says. “A little rain never hurt.”

“Sis, I don’t think we should split up. This is the biggest city in the world. It has like a trillion people in it. We should all stay together and find our way home. Wilferd is probably balling his eyes out right now,” Blake says.

“Look. I knew you two were gonna be party-poopers,” Celie says, as she begins climbing out from under the bush. “I’m gonna go all by myself and nothing bad is gonna happen to me. So stop worrying and shut– Ahhhhhhhh!” All of a sudden, a woman picks Celie up and begins walking away.

“Celie!” Drake and Blake both yell. They scurry towards the lady and begin clawing the woman. Celie wiggles wildly while she is distracted and jumps down to the ground with her brothers.

“Geez Louise. That was a close one. Thanks guys. You know what? You guys aren’t dummies after all. I love you both so much,” Celie says with warmth in her voice.

“We love you too, sis,” Blake and Drake say.

“Yeah, yeah, yeah, let’s not get all emotional.” Celie mutters.  “Let’s just get home before Wilferd gets too worried.” As soon as they get home, they notice Wilferd has forgotten to lock their escape window. They all run to the bedroom and see that another episode of their favorite show is starting. Blake and Drake nod off, while Celie starts watching the cute boy cats again.