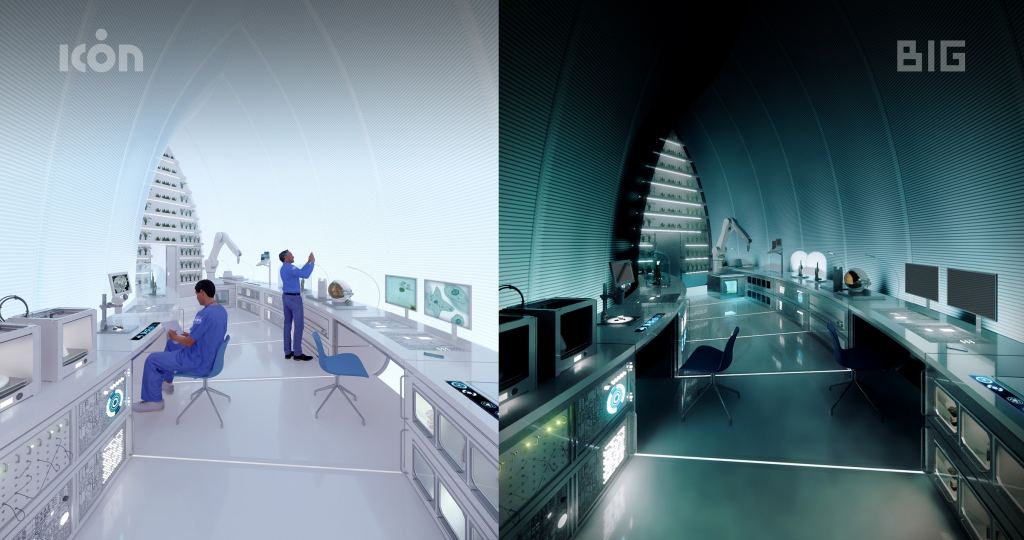 In October of 2024, NASA’s Artemis Program will return astronauts to the surface of the Moon for the first time since the Apollo Era. In the years and decades that follow, multiple space agencies and commercial partners plan to build the infrastructure that will allow for a long-term human presence on the Moon. An important part of these efforts involves building habitats that can ensure the astronauts’ health, safety, and comfort in the extreme lunar environment.

This challenge has inspired architects and designers from all over the world to create innovative and novel ideas for lunar living. One of these is the Lunar Lantern, a base concept developed by ICON (an advanced construction company based in Austin, Texas) as part of a NASA-supported project to build a sustainable outpost on the Moon. This proposal is currently being showcased as part of the 17th International Architecture Exhibition at the La Biennale di Venezia museum in Venice, Italy.

The Lunar Lantern emerged from Project Olympus, a research and development program made possible thanks to a Small Business Innovation Research (SBIR) contract and funding from NASA’s Marshall Space Flight Center (MSFC). Consistent with ICON’s commitment to developing advanced construction technologies, the purpose of Olympus was to create a space-based construction system that will support NASA and other future exploration efforts on the Moon.

To realize this vision, ICON partnered with two architectural firms: the Bjarke Ingels Group (BIG), and Space Exploration Architecture (SEArch+). Whereas BIG is renowned for its iconic architecture and its work on multiple Lunar and Martian concepts in the past several years, SEArch+ is recognized for its “human-centered” designs for space exploration and its long-standing relationship with NASA’s Johnson Space Center (JSC) and Langley Research Center (LRC).

In fact, SEArch+ past involvement with NASA includes their work as part of the Human Habitability Division at NASA JSC and the Moon to Mars Planetary Autonomous Construction Technologies (MMPACT) team. They have also participated in multiple Phases of the NASA 3D-Printed Habitat Challenge (2015-2019) which included the Mars Ice House and Mars X-House V2 (the winning entries of Phase 1 and Phase 3, respectively).

The result of their collaboration is the Lunar Lantern, a comprehensive lunar outpost that can be constructed on the Moon using automated robotic 3D printers. Consistent with the philosophy of these companies and NASA’s Artemis Program, the construction of this outpost leverages a number of burgeoning technologies as well as In-Situ-Resource Utilization (ISRU) to minimize dependence on Earth.

For the sake of their presentation at the Architectural Exhibition, SEArch+ prepared an updated video of their base concept (shown below) that illustrates how the Lunar Lantern concept will enable a sustained human presence on the Moon. To address the various hazards of the lunar environment, the main habitat employs three structural components: a Base Isolator, Tension Cables, and a Whipple Shield.

Base isolators are essentially seismic dampeners, which are deployed at the foundation to absorb the shocks and stresses caused by regular “moonquakes” – which are either “shallow” or “deep.” Shallow quakes occurr at depths of 50-220 km (31-137 mi and are attributed to changes in surface temperature and meteorite impacts. Deep quakes are more rare and powerful, originating at depths of ~700 km (435 mi), and are caused by tidal interactions with Earth.

Then there are the externally mounted tension cables, which apply compressive stress to the habitats 3D printed walls. The outermost component, the Whipple Shield, is a double shell made up of an interior lattice and external shield panels. This provides protection against ballistic impact from micrometeorites and ejecta (caused by impacts nearby) while also shielding the interior structure from the extreme heat caused by direct exposure to the Sun.

In addition to protecting against the extremes in temperature, radiation, and seismic activity, one of the chief concerns is the hazard posed by all the jagged and statically charged lunar regolith (aka. “moon dust”). As they illustrate, the Lunar Lander base is equipped to contain (and benefit from) this problem:

“The Lunar Lantern outpost consists of habitats, sheds, landing pads, blast walls, and roadways. Landing pads, thought to be one of the first lunar structures, will need to contain and control the supersonic and subsonic dust ejecta created during launch and landing. SEArch+’s design offers multiple strategies for dust mitigation and dust collection in printability, form, and function.”

As the animation demonstrates, the configuration of the landing pads allows for the dust to be collected, preventing it from dispersing across the surface and interfering with operations. The collected dust can then be used as feedstock for the construction robots, which rely on regolith to fashion 3D printed structures. This way, the design not only prevents ejecta from becoming a serious hazard but also provides a steady supply of material that can be used to effect repairs to the structure.

As for the name, this was inspired by another important design feature, one which ensures human comfort. In short, the Lantern admits light from the lunar surface and then turns it into interior lighting that is adjusted (based on the section of the habitat) and turned off entirely to simulate nighttime. Or as they explain in the video:

“In order to replicate the Earth’s daily circadian rhythms and seasonal cycles, the Lunar Lantern utilizes a fiber optic system which captures the nearly perpetual light at the Moon’s south pole and modulates it in both brightness and color temperature. The interior of the habitat is organized vertically, with three designated levels – for work and exercise, dining and social, sleeping and private spaces.”

There are also a few “Easter Eggs” in the video, which commercial space and space exploration aficionados will not fail to notice! In both videos posted above (particularly the one produced by SEArch+), some familiar vehicles can be seen on the landing pads. This includes the SpaceX Starship, which Musk has promised will be ready to transport cargo and crews to the Moon in a few years, and Blue Origin’s Blue Moon lander – possibly the Human Landing System (HLS) variant specifically designed for NASA’s Artemis Program.

There is no shortage of ideas for how humans could live on the Moon and Mars someday. While the design elements differ from one concept to the next, they all share the same commitment to leveraging 3D printing, sustainability, and the ability to provide for water, power, and food using local resources. Each also emphasizes how planning to live sustainably in a hostile environment can shape how we live on Earth.

The Lunar Lantern is not the only space architecture exhibition featured at the 17th International Architecture Exhibition (which will run until Nov. 21st). The European Space Agency (ESA) – in partnership with the international architecture firm Skidmore, Owings & Merrill (SOM) – are also showcasing their proposal for a fully operational semi-inflatable lunar habitat, known as the “Lunar Village.”

These two proposals beautifully illustrate how proposals for living beyond Earth are becoming a part of mainstream architecture. As this decade comes to a close, this trend is likely to continue, eventually becoming an entirely new form of architectural, industrial, and interior design. If and when humans begin to settle on the Moon and Mars, we can expect the real estate industry will follow suite!