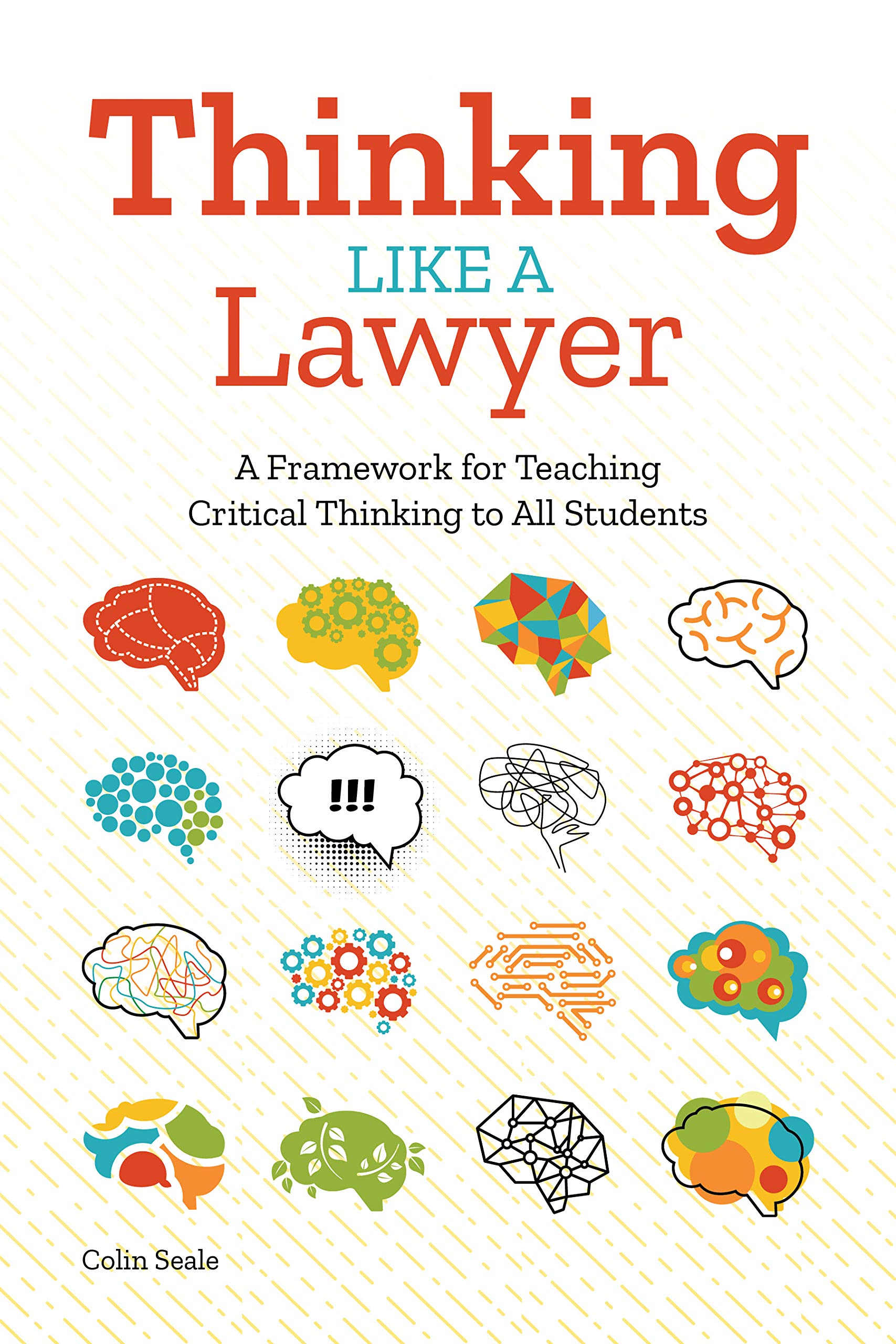 Listen to the interview with Colin Seale:

This post contains Amazon Affiliate links. When you make a purchase through these links,
Cult of Pedagogy gets a small percentage of the sale at no extra cost to you.

My son Oliver is enrolled in virtual school this year. He has an amazing teacher who kicked off the year with her kindergarten students by going through the alphabet. As they went through each letter, students had to suggest words that started with that letter.

When they got to the letter after H and before J, one student yelled out, “Iguana.”

“Great work!” the teacher said. “Who else has a word that starts with our letter?”

Crickets. No one said anything. As an eavesdropping dad, I was thankful this wasn’t a drinking game, because I had nothing! Suddenly, Oliver unmuted, huge smile on his face, and joyfully shared his answer:

His teacher looked at him, smiled, and said, “I’m sorry, that’s not right. Does anyone else have a word that works?”

I looked at him and saw the joy stripped from his eyes. I started to think about the wonder he and just about every child comes out of the womb with. I began to worry about what happens when we stifle that wonder because of our rigid practice of creating such a narrow window of what we consider to be helpful contributions. And I fully understood how it comes to be that previously engaged learners learn to check out of school.

There are serious pedagogical issues with what happened here. For formative assessment purposes, how does this teacher’s answer help her understand, diagnose, and correct what Oliver’s potential misunderstanding is? For the purposes of developing student agency, how does her decision to not allow Oliver to explain his thinking limit his ability to sharpen his reasoning skills and disposition towards supporting his claims with evidence? It turns out that although his mistake could have been an association between lizards and iguanas or a mistake about what constitutes an “i” word (look at the second letter in lizard), it really came down to what happens when you start school in Zoom using the Arial font where a lowercase L and uppercase i are the same character: “l.” But because the teacher moved on without stopping to investigate Oliver’s response, that reason was not uncovered in class.

Mistakes are a natural part of learning, but students cannot develop into critical thinkers if they regularly freeze out of the fear of making a mistake. As educators, we can shift the culture of our classrooms to embrace mistakes, and one way to do this is through mistake analysis, one of several powerful but practical strategies I share in my book, Thinking Like a Lawyer: A Practical Framework to Teach Critical Thinking to All Students. As a math-teacher-turned-attorney, I wrote this book and started my organization, thinkLaw, to help educators seamlessly incorporate critical thinking into their curriculum.

Critical Thinking as a Pathway to Equity

I have a confession: I’m in this for the rule-breakers. Our profession attracts many people who became educators because the compliance-based, rule-following system worked well for them. But I was not one of those people. As a young student, I had a lot of behavior challenges, but it turned out these were the result of not being challenged. It was only later in life, when I attended law school, that I was taught the kind of critical thinking I needed when I was younger, the kind of thinking that would have kept me challenged.

Critical thinking should not be luxury good. But our current system often treats it that way, setting aside this kind of challenging work for only the most advanced students. In conversations about equity in education, one question I always ask is How do we make equity real at the classroom level? We can talk about implicit bias all day, but what about the explicit bias of saying “These kids can’t”? What “These kids can’t” often means is “As an educator, I have no idea how to create learning conditions such that all kids can.”

So I decided to create spaces that rewarded disruption and divergent thinking—spaces I longed for when I was going through the K-12 system. I view access to critical thinking as THE pathway for making equity real at the classroom level by giving students the opportunity to lead, innovate, and break the things that must be broken as a core part of their educational experience. This is not possible in a world where students are afraid of getting the wrong answer.

Four Ways to Implement Mistake Analysis in Your Classroom

The magic of mistakes is not a belief system. It is a practical set of tools you can apply in almost any classroom context, regardless of grade level or subject area. Here are four strategies you can use to leverage mistake analysis as a seamless way to incorporate critical thinking into your instruction:

When planning for instruction, think ahead about the kinds of mistakes students are most likely to make. You already know how students will get confused when adding fractions with unlike denominators. You can predict that some students might confuse fact with opinion when the statement is “pizza is the best food ever” (because it is).

But don’t stop at identifying WHAT students may do incorrectly. Make sure you think about WHY the mistake may happen so you can do a better job in your instruction to show them HOW to prevent that mistake. For instance, if a student tells you that 5 + 2 = 6, you should anticipate this to be a common mistake that occurs when students start their counting with an addend, which sounds like, “Okay, starting with 5, I’m adding 2, so 5, 6. The answer is 6.”

2. Use probing questions to grapple with “good” mistakes in real time.

Teacher: Who would you argue is most responsible for the assassination of Malcolm X?

This real-life classroom exchange shows why it is hard to prepare for the infinite universe of potential mistakes. But do not be so quick to dismiss a student’s answer as totally off-base. They offer a lot of opportunities for learning and some of them have the potential to be “magic.” Instead of moving on so quickly, try some of the following probing questions:

If you simply dismissed this student’s answer as nonsense, you would have missed out on the clever connection this student made between JFK’s assassination, Malcolm X’s controversial quote stating that this tragedy was an example of “chickens coming home to roost,” and inevitably, a turning point in the growing tension between Malcolm X and the leadership of the Nation of Islam.

3. Ask students to create their own “good” mistakes.

“How might someone get this question wrong?” When we have students anticipate the most predictable mistakes that might be made on a task, we’re moving well beyond that lower level of test-taking skills and instead, getting students to think like test-makers, coming up with viable (but incorrect) options on a multiple-choice test.

It’s important that when students do this, they come up with logical possibilities. I have my students follow what I call the “Joe Schmo” rule: What kind of answer would trip up Joe Schmo, the average person who always falls for the trick answer? Instead of letting students come up with crazy, nonsensical options, this rule keeps the exercise at a challenging metacognitive level.

Mistake analysis can also be an opportunity to introduce conflict, drama, and meaningful opportunities to write and debate across content areas. As an attorney representing clients in business disputes, I rarely had a case where one side was pristine and the other was pure evil. They were usually both wrong, to some extent. But the core question was, which one is more “right”?

Bring this framework into your classroom by analyzing two equations that are both done incorrectly, but one has a computational error and the other has a conceptual answer. Two paragraphs or essays where one has structural errors and the other is riddled with spelling and grammatical mistakes. Two science experiments with flawed procedures because one has problems with omitted variable bias and the other struggles with selection bias. Asking which wrong is more “right” helps learners shift from asking “what” and “how to” to asking “why” and “what if” – a necessary shift for giving students the tools to not just analyze the world as it is, but imagine it as it ought to be.

I am a true believer in the magic of mistakes. To be clear, I am not advocating for a world with no wrong answers. I am advocating for a world where children (and adults) are less obsessed with being right and much more focused on the process of understanding what it means to do right. Care about social-emotional learning? There is tremendous empathy to be gained from learning why someone sees something differently than you do. Worried about how you can motivate students to engage in critical thinking? There are amazing instructional implications for planning for mistakes in a way that sets up a classroom culture where traits like compliance and risk-taking outweigh the default culture of compliance and rule-following.

When we don’t give our students opportunities to engage in critical thinking at all levels, we are systemically leaving brilliance on the table. By adding strategies like mistake analysis to our regular classroom practice, we’re tapping into that brilliance and making it more likely that all of our students will thrive.

Mistake analysis is just one of the many powerful but practical strategies I break down in more detail in Thinking Like a Lawyer and in the work we lead with school systems across the country to ensure critical thinking is no longer a luxury good. Learn more about what we do at ThinkLaw.us.

Come back for more.
Join our mailing list and get weekly tips, tools, and inspiration that will make your teaching more effective and fun. You’ll get access to our members-only library of free downloads, including
20 Ways to Cut Your Grading Time in Half, the e-booklet that has helped thousands of teachers save time on grading. Over 50,000 teachers have already joined—come on in.
Education