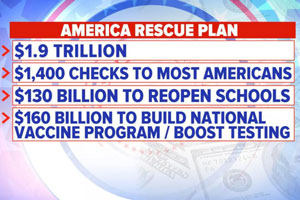 Ten Senate Republicans have proposed a COVID relief bill of about $600 billion. That’s less than a third of Biden’s plan. They promise “bipartisan support” if he agrees.

Their proposal isn’t a compromise. It would be a total surrender. It trims direct payments and unemployment aid that Americans desperately need.

Rubbish. We can’t afford not to. Millions of people are hurting.

Besides, with the economy in the doldrums it’s no time to worry about too much spending. The best way to reduce the debt as a share of the economy is to get the economy growing again.

Beyond COVID relief, Biden has other proposals waiting in the wings, such as repairing aging infrastructure and building a new energy-efficient one. These would make the economy grow even faster over the long term – further reducing the debt’s share.

There’s no chance that public spending will “crowd out” private investment. If you hadn’t noticed, borrowing is especially cheap right now. Money is sloshing around the world in search of borrowers.

It’s hard to take Republican concerns about debt seriously when just four years ago they had zero qualms about enacting one of the largest tax cuts in history, largely for big corporations and the super-wealthy.

If they really don’t want to add to the debt, they have another alternative: A tax on super-wealthy Americans.

The total wealth of America’s 660 billionaires has grown by a staggering $1.1 trillion since the start of the pandemic, a 40 percent increase. They alone could finance almost all of Biden’s COVID relief package and still be as rich as they were before the pandemic. So why not a temporary emergency COVID wealth tax?

Let’s be honest. The real reason Republicans don’t want Biden’s plan is they fear it will work.

This would be the Republican’s worst nightmare: All the anti-government claptrap they’ve been selling since Ronald Reagan will be revealed as nonsense.

Government isn’t the problem and never was. Bad government is the problem, and Americans have just had four years of it. Biden’s success would put into sharp relief Trump and Republicans’ utter failures on COVID and jobs.

If Biden gets his plans through, he and the Democrats would reap the political rewards in 2022 and beyond. Democrats might even capture the presidency and Congress for a generation. After FDR rescued America, the Republican Party went dark for two decades.

Trumpian Republicans in Congress have an even more diabolical motive for blocking Biden. They figure if Americans remain in perpetual crises and ever-deepening fear, they’ll lose faith in democracy itself.

This would open the way for another strongman demagogue in 2024 – if not Trump, a Trump-impersonator like Ted Cruz, Josh Hawley, or Trump Junior.

If Biden is successful, though, Americans’ faith in democracy might begin to rebound – marking the end of the nation’s flirtation with fascism. If he helps build a new economy of green jobs with good wages, even Trump’s angry white working-class base might come around.

Biden doesn’t really need Republicans, anyway. With their razor-thin majorities in both houses of Congress, Democrats can enact Biden’s plans without a single Republican vote.

My worry is Biden may want so much to demonstrate bipartisanship that his plans get diluted to the point where Republicans get what they want: Failure.

If Republicans try to stonewall Biden’s COVID relief plan, Biden and the Democrats (will) go it alone through a maneuver called “reconciliation,” allowing a simple majority to pass budget legislation.

If Republicans try to block anything else, Biden and the Democrats should scrap the filibuster – which now requires 60 senators to end debate. The filibuster isn’t in the Constitution. It’s anti-democratic, giving a minority of senators the power to block the majority. It was rarely used for most of the nation’s history.

The filibuster can be ended by a simple majority vote. Democrats now have the power to scrap it. Biden will have to twist the arms of a few recalcitrant Democrats, but that’s what presidential leadership often requires.

The multiple crises engulfing America are huge. The window of opportunity for addressing them is small. If ever there was a time for boldness, it is now.