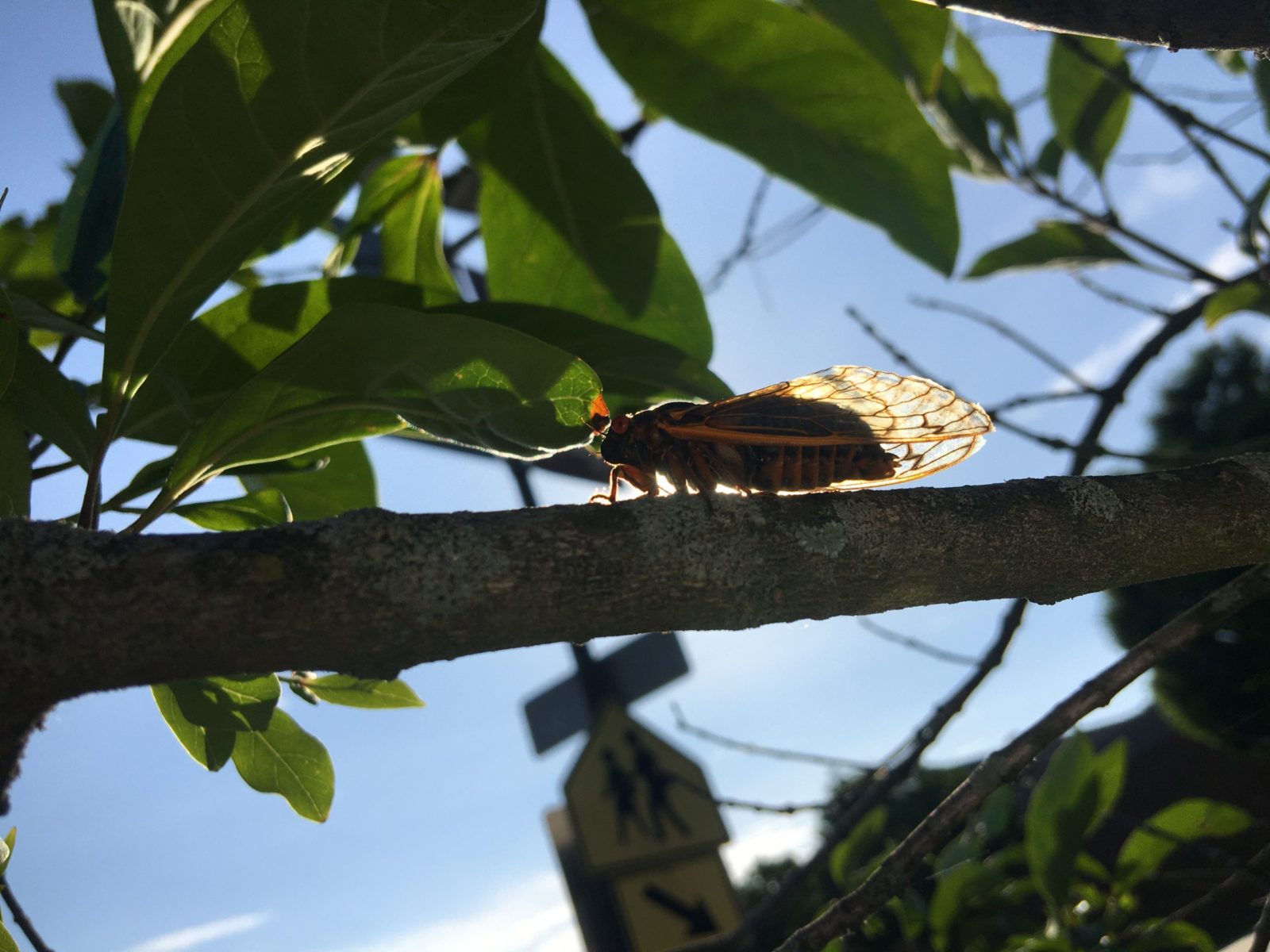 File this under: Odd Adventures in Cicadas and Anatomy (mine and the cicadas’), or Why You Shouldn’t Wear Ear Buds While You Walk the Dog during a Cicada Emergence

I’m not particularly squeamish about insects and, as previously noted on CGS, I have an entrenched fascination with the Brood X periodic cicadas that have inundated my Maryland neighborhood for the last few weeks. So I was not bothered by all the cicadas flying around my face or landing on my shirt or my arm or my leg – or pretty much everywhere – any time my dog Bodie and I hit the trail lately.

I was not bothered, that is, until one flew into my ear. Not all the way in. Not even most of the way in, but still, in far enough to make my left ear ring for hours. This was not the typical cicada flyby Bodie and I were used to.

Fortunately for me, a human ear canal, average diameter 0.7 cm, will not admit the 1.9 to 5.7 cm adult body of any of the three cicada species that comprise Brood X. Even the smallest adult is too big to go spelunking very far toward a human eardrum.

However, cicadas do have legs and those, as I can attest, are small enough to fit at least a little way down a human ear canal just fine. I don’t know if it was a leg or two, or a rostrum that almost got up close and personal with my tympanic membrane, but whatever it was, it was stiff and a little bit prickly.

Songs of the Magicicada Cicadas

Here we pause for a brief discussion of cicada, well, acoustics and a little more anatomy. Male cicadas are noisy in general; they’re built to be loud, with much of their bodies consisting of air-filled spaces that amplify their calls. You can think of them as kind of like tiny, flying guitars. Their bodies are built to resonate. At volume.

Male periodic cicadas, like those in Brood X, that emerge en masse for a few short weeks in 13- and 17- year cycles are exceptionally loud. All those males gathered together can create decibel levels that have been compared to lawn mowers, motorcycles and jet airplanes. The incessant sound you hear at peak cicada is the chorus of males’ mating songs. (Females don’t sing, but they do click.)

The chorus is loud because individual males are working really hard to attract females with their songs, and also to drown out or otherwise thwart other males’ attempts to score. In a way, it’s an odd twist on Battle of the Bands. Instead of a recording contract, winners get a chance to ensure their genes carry on through the next generation.

At Least They Don’t Bite or Sting

Even now, I’m still not exactly sure how the cicada ended up in my ear for a relatively extended period. I think it was a combination of my long hair and the ear buds. I don’t usually wear ear buds when I walk with Bodie because, well, it seems kind of rude. But I was on the phone that morning so I made an exception. At first, I thought the really high-pitched kind of intermittent buzzing in my left ear meant something was wrong with my fancy noise-canceling wireless ear buds.

It sounded very electronic, with a rhythmic rising and falling cadence that reminded me of a general quarters alarm on the fritz. So I did what anyone would do, I reached up and pulled out my left ear bud. Except that made the noise worse. Oh, so much worse because it got so much louder.

I still didn’t understand what was happening and it took my brain a few seconds to make the connection: noise = cicada. There’s a cicada in my ear. A male one. Then, because this is how I can be, I listened to try to figure out the particular species. They all have different songs and alarm calls, but it can be really hard to tell them apart.

Unless, of course, there’s a single cicada pretty much calling directly into your ear. Then it’s easy. Apparently, in my world, hearing loss is a small price to pay for taxonomic certainty.

Definitive verdict for species in my ear: Magicicada septendecim (also known as the Pharaoh cicada)

Now That That’s Settled, There’s Still a Cicada in My Ear

It probably only took me 10 seconds or so to work through all of that, but it felt longer. And, by then my ear was ringing and I felt something poking into my ear canal. Whether or not the cicada was truly stuck, it still wasn’t flying away. It seemed to be trapped in my outer ear by my hair. As I gently gathered the strands away from my head, the sound started to take on a kind of substance.

My jawbone seemed to vibrate like a tuning fork, and I’ve never been more grateful for my mother’s devotion to good dental hygiene throughout my childhood. If I had any cavity fillings, I’m pretty sure the frequency of the cicada’s call would have rattled them right out of my head. I tipped to one side and jumped up and down like a diver shaking water out of an ear and it finally flew away.

“What happened?” said the person I’d been on the phone with (whom I’d actually forgotten about).

“Oh,” I said as I gingerly put the ear bud back in place, “a cicada flew in my ear, and I had to get it out. Mission accomplished.”

Bodie (who is not a cicada-eater*) had waited patiently so we continued our walk. The hearing in my left ear came back about three hours later, at which time my husband helpfully noted that the next time Brood X makes an appearance, I’ll probably already be sporting a full-time hearing aid anyway.

*Shout out to Jen Molnar, TNC’s Managing Director and Lead Scientist, Center for Sustainability Science, whose pup has a cameo in this article from the Washington Post.