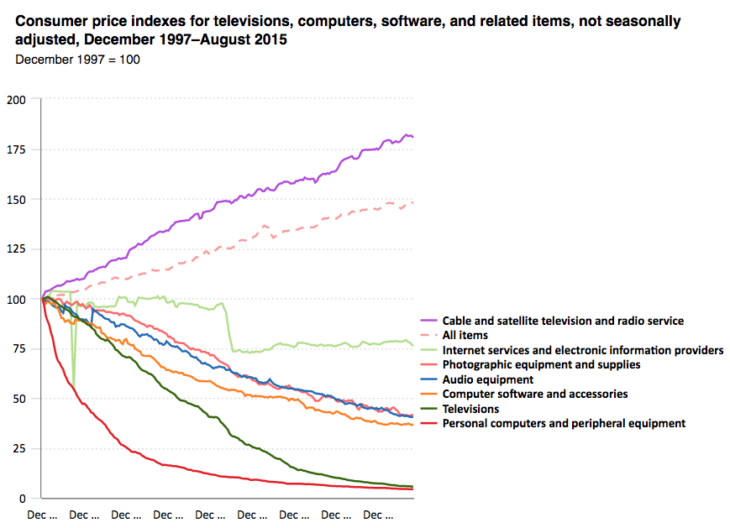 Of course, what’s actually going on here isn’t so much that people are spending less money of TV sets, rather that they are getting better TV sets when they spend $200 at the local retailer.  But how much better?  The BLS estimate suggests that a $200 TV set purchased in 2015 was 18.2 times better than a $200 set purchased in 1997.  But what does that mean?

When I’ve raised this issue in the past, commenters have occasionally suggested that “revealed preference” provides some sort of objective way of ascertaining the subjective value of TV quality improvements.  But that view is based on a misunderstanding of concepts like “willingness to pay” and “consumer surplus”.

For many decades, the TV market has generated a large amount of consumer surplus.  People spend a lot of time watching TV, and would be willing to pay a fairly large sum for TV sets if they had to.  But they don’t have to, because supply has increased sharply due to technological progress, and also because the industry is pretty competitive, with many sellers to choose from.  So the price that people actually pay for a TV set doesn’t tell us how much value they derive from the set (except at the margin).

A slightly more sophisticated argument is that if one set sells for 10 times more than another set, then consumers must derive 10 times more value for the fancier set.  Again, this is wrong.  The people buying expensive TV sets are different from those who choose to buy cheaper sets.  Why wouldn’t Bill Gates want to get the best TV set at almost any reasonable price?

The older I get, the less confident I am that we have any objective way to measure utility.  Keynes (1936, Ch. 4) had the same view:

But the proper place for such things as net real output and the general level of prices lies within the field of historical and statistical description, and their purpose should be to satisfy historical or social curiosity, a purpose for which perfect precision — such as our causal analysis requires, whether or not our knowledge of the actual values of the relevant quantities is complete or exact — is neither usual nor necessary. To say that net output to-day is greater, but the price-level lower, than ten years ago or one year ago, is a proposition of a similar character to the statement that Queen Victoria was a better queen but not a happier woman than Queen Elizabeth — a proposition not without meaning and not without interest, but unsuitable as material for the differential calculus. Our precision will be a mock precision if we try to use such partly vague and non-quantitative concepts as the basis of a quantitative analysis.

BTW, Is there anything worse than an economist mocking the public for being consistently “biased” in their forecasts of inflation, as if economists have some sort of scientific way of ascertaining the “true” rate of inflation?  Should we really be scolding the public for not understanding that since 1997 the price of a brand new $200 TV set has fallen to $11?

PS.  On the other hand, the nominal aggregate expenditure on TVs is a relatively objective concept, and does have real meaning.

PPS.  After his comments on the price level and real output, Keynes suggested that what we should actually be focusing on is the money value of income/output, and also the total level of employment.  I agree.