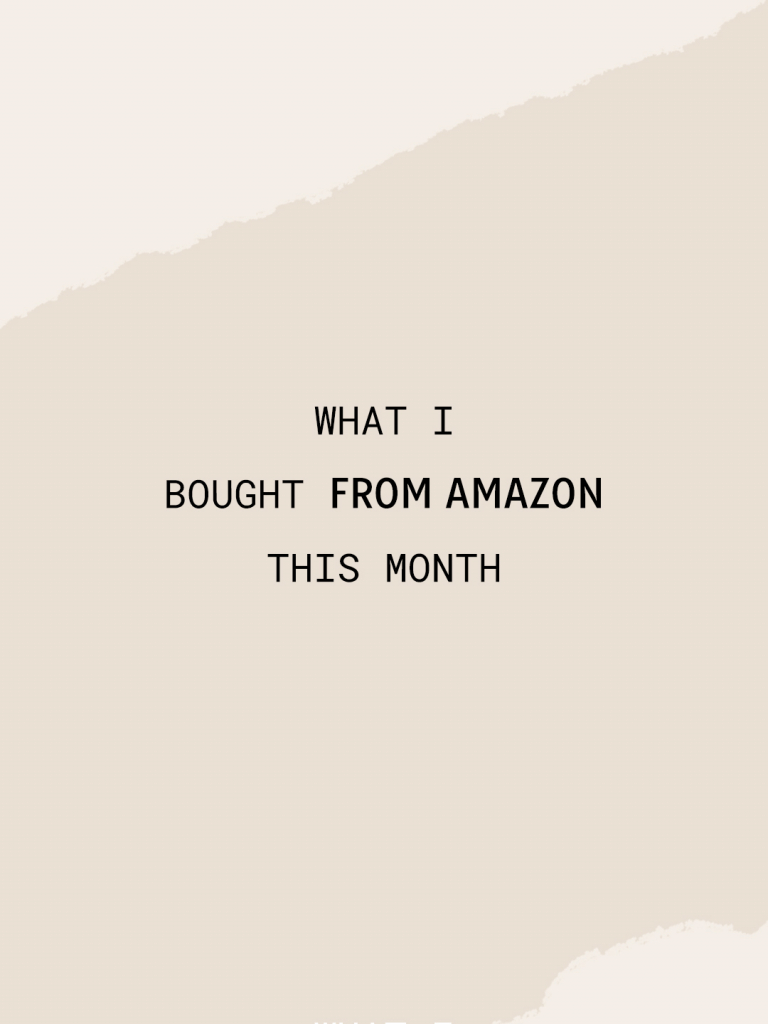 You’ve probably noticed by now, but with the new site, I wanted to up the amount of content I was bringing you guys as well. Between the newsletters (which you can sign up for here), and some other blog series that I’ve started, one other request was more from Amazon.

To be honest, even though I’d noticed other influencers talking about Amazon Fashion often, I wasn’t sold. I’m picky about quality and wasn’t sure about their choices, but after hearing those requests from you, I wanted to deliver.

I promise I won’t be blowing you up with Amazon Fashion items, because again, I usually like to wear something before recommending it, but I’m starting small. I’ve started my Amazon Storefront which I’ll update a couple times a month and I’ll also share my monthly orders, starting today. From home to stuff for Harper to fashion, you can expect to see what we’ve ordered every month.

MATERNITY BIKER SHORTS: I bought quite a few pairs of these to test out and so far, so good! Each pair is really soft, and while they’re on the thinner side, it’s what I expected for the price. I’m glad this trend is happening right now because I plan on living in these as the bump keeps growing this summer and fall. This sage color is my favorite but I’ll probably wear the black and white options more often.

4 WHEELER TRUCK: I splurged on our last 4 wheeler and it totally sucked. We ended up selling it before we moved. We did want her to have something and she loves cars so much. This thing is a beast, lol. It’s a 1 seater but still very bulky. Harper hasn’t really touched it, lol. It’s pretty fast and isn’t the biggest fan of “driving” yet. But, so far so good. It rides well and doesn’t seem like it’s going to fall apart.

LITTLE TIKES COUPE CAR: Harper loved this car back in Oregon that her neighbor had. We knew we’d be spending so much time outside in California, so I finally bit the bullet. She plays with this A LOT, even though it’s small. I think the red and yellow version is bigger, so just make sure you read the fine print, ha.

MEN’S TOILETRY BAG: Mike is headed on a trip soon and he needed a new toiletry bag. I was going to go get something name brand and then I said F it. I browsed Amazon reviews and this one is a best seller and has a ton of great reviews. It’s simple, no frills, isn’t overly bulky, and affordable. I’ll report back after his trip.

CLEAR TRAVEL BAGS: Mike is a, “let’s throw everything in a plastic bag” kinda guy and I was finally ready for him to upgrade, lol. These are simple, come in a pack of 3, and great for traveling. I’ll report back on these after his trip.

TODDLER CROCS: We all love these! Even Mike has a pair of crocs now, lol. Harper can slip these on and off and it makes life so much easier. We went TTS and they fit well.

TODDLER BIKE SHORTS: Toddler bike shorts are hard to find, lol. I was looking around at my favorite stores, everything was sold out, so decided to come to Amazon. We have yet to try these, but I’m super hopeful. They’re adorable and run TTS.

STEAM MOP: Mike loves this! The floors at our rental were SUPER dirty when we moved in, even after having them “cleaned.” This did wonders. It takes a while to do a whole house at once, which Mike does not recommend. But for tackling rooms one by one, it’s fast and super easy to use. For under $100, we’ve been impressed.

TODDLER HAIR TIES: I had the plastic ones and Harper hated them, so I finally hunted these soft ones down and now she’s way more open to letting me tie her hair back. Why it’s taken me this long, I have no idea, lol.

ADULT HAIR TIES: Heard great things about these hair ties – soft and they don’t leave creases in your hair. So far, so good!

LOUNGEWEAR: The first trimester was rough so I was basically living in loungewear unless I absolutely had to change. I had this set already, so I wanted to get the short sleeve version, whit fits and feels exactly the same. I have the small in the nude set and got the medium in the gray set (sized up for the bump). These sets are thick and nice. I recently ordered this set and it feels super cheap, so I’m returning it.

HEADPHONES FOR HARPER: We bought Harper an mp3 player as well as these headphones. She hasn’t been a big fan of how big they are on her ears, but I’m hoping she’ll come around to them. So far, they seem like good quality, but I’ll have to report back. I like that they’re small and neutral.