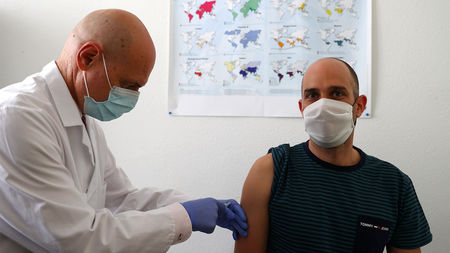 Science’s COVID-19 reporting is supported by the Heising-Simons Foundation.

The startlingly poor performance revealed this week for a COVID-19 vaccine made by the German company CureVac isn’t just a disappointment, it’s a scientific puzzle. The company blames the rapidly changing pandemic virus. But several outside researchers suspect the vaccine’s design is at fault.

Many scientists and investors alike had expected CureVac’s candidate, which uses messenger RNA (mRNA) to code for the spike surface protein of SARS-CoV-2, had a good chance of becoming one of the most powerful new weapons against the pandemic. It relies on essentially the same novel mRNA technology as vaccines from the Pfizer-BioNTech collaboration and Moderna, which had more than 90% efficacy in their trials, and it holds some practical transportation and storage advantages over those rival shots. But preliminary data released Wednesday evening and discussed on a call with investors yesterday suggest the efficacy of the CureVac vaccine is a lackluster 47%—low enough that, if further data are equally disappointing, health regulators likely won’t authorize it for emergency use.

The efficacy trial enrolled some 40,000 people, about 75% in Latin America and 25% in Europe. The topline finding came from an interim analysis evaluating 134 participants who developed at least one COVID-19 symptom. Although the company did not give a breakdown, the reported 47% efficacy translates to roughly 88 cases in the placebo group and 46 among the vaccinated. “The results are sobering,” said Franz Werner-Haas, CureVac’s CEO.

He stressed that the many SARS-CoV-2 variants now in circulation may explain the disappointing results. The vaccine’s mRNA was designed for a version of spike that was dominant among viruses early in the pandemic but has evolved through multiple mutations. “We are virtually fighting a different virus, different pandemic over the last 6 months,” Werner-Haas said.

The trial scientists sequenced the virus in 124 participants who got sick and found 13 different variants. Only 1% of the infected people had a SARS-CoV-2 whose spike matched the mRNA used in the vaccine. “Demonstrating high efficacy in this unprecedented broad diversity of variants is quite challenging,” Werner-Haas said.

Other efficacy trials have found that certain mutant strains of the coronavirus can compromise the ability of COVID-19 vaccines to protect against mild disease, but the variant that has most powerfully undermined other vaccines, Beta, was not seen in the CureVac study. In contrast, Alpha, first seen in the United Kingdom and one of the earliest variants of concern, caused 41% of the 124 cases overall and 91% of the 44 cases that occurred in Europe.

Kathleen Neuzil of the University of Maryland School of Medicine doubts variants fully explain the poor performance of CureVac’s vaccine. Unlike CureVac’s mRNA shot, she says, the Pfizer-BioNTech and Moderna vaccines “work very well against Alpha.” She cautions that it’s difficult to compare trials of different vaccines, but says, “It’s just hard for me to believe that the variants could have this degree of effect.”

CureVac did not provide any data about how many of the infected in its efficacy trial developed severe disease. Other vaccines continue to prevent most hospitalizations and deaths even when variants reduce their protection against mild COVID-19.

Some scientists trying to make sense of the CureVac result point to an earlier, phase 1 study of the vaccine. It showed that serum levels of so-called neutralizing antibodies, which prevent the virus from binding to cells, were relatively low in vaccine recipients compared with people who naturally became infected with the coronavirus. “It’s certainly a good possibility that the vaccine is just not immunogenic enough,” says John Moore, an immunologist at Weill Cornell Medicine who specializes in analyzing neutralizing antibodies.

The type of mRNA used by CureVac may undermine antibody formation, contends Drew Weissman of the University of Pennsylvania’s Perelman School of Medicine, who helped pioneer certain mRNA modifications used by in the Pfizer-BioNTech and Moderna vaccines. (Those companies license the technology, which may financially benefit the university and Weissman.) CureVac’s vaccine used an unmodified form of mRNA. When natural mRNA is injected into the body, it triggers the production of interferons, signaling molecules that can rev up the immune system. CureVac touted that as an advantage of its formulation. But Weissman notes interferons can also block the generation of T helper cells that, in turn, direct B cells to make antibodies.

Pfizer and BioNTech and Moderna, in contrast, chemically altered the uracils, one of the four nucleotides that make up RNA, in their spike-encoding sequences. Weissman’s group had shown in 2018 that uracil-modified mRNA triggered potent neutralizing antibodies and other protective immune responses in animal models. He notes that a BioNTech study comparing modified and natural mRNA vaccines also found that the modifications boosted the antibody response.

Peter Kremsner of University Hospital Tübingen, who helped run the CureVac study, suggests another factor: too low a dose of vaccine. “I am uncertain what it was finally, natural uracil or only dose or both,” he says. Kremsner helped conduct CureVac’s phase 1 study, which compared the safety and immune responses generated by doses between 2 and 20 micrograms. The study revealed the company should not use the higher doses “because of intolerability, perhaps due to natural uracil?” he says. (Kremsner says he hopes to publish his work soon, but a preprint with some of the study’s data has already been posted.) CureVac settled on 12 micrograms, a dose that balanced the best safety profile with the highest level of neutralizing antibodies. (The Pfizer-BioNTech vaccine uses a 30-microgram dose and Moderna’s is 100 micrograms.)

Other data presented at yesterday’s press conference suggest, however, that the design of the vaccine is more important than the dose. CureVac reported data from a monkey study that compared its current vaccine to a next-generation version, which is more stable inside of cells and made in collaboration with the pharmaceutical giant GlaxoSmithKline: The new candidate produced higher levels of the spike protein, triggering a 10-fold higher level of neutralizing antibodies. Dose-ranging studies of the Pfizer and Moderna vaccines have also found that higher mRNA doses offer relatively modest gains in antibody levels.

Still, CureVac says it must wait for the final analysis of the current efficacy trial, expected to include more than 200 COVID-19 cases, before it makes a “strategic shift” to the second-generation vaccine. “For now, we are going full speed exactly where we are,” Werner-Haas said. “We are expecting the data to come within the next 3 weeks.”