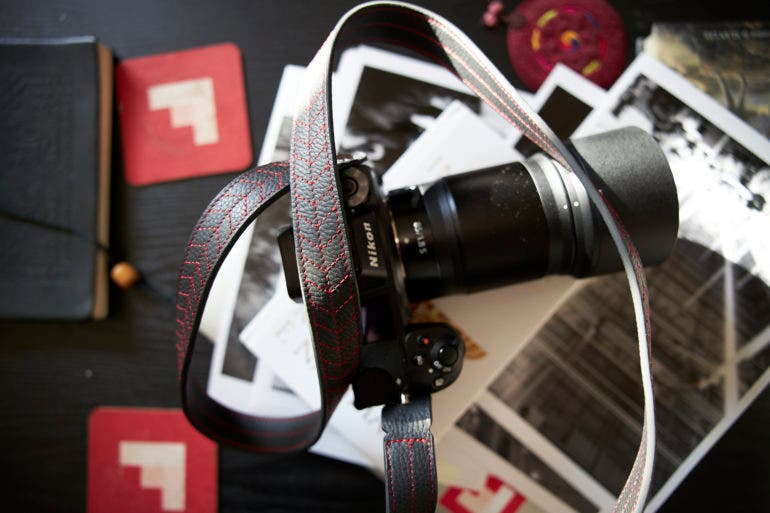 Fact: most photographers tend to stick with the stock camera strap they get from the camera manufacturer. In most cases, this couldn’t be any more wrong. It’s convenient for sure, but manufacturer camera straps are often some of the worst we’ve used. They’re not good for a variety of situations, and they’re often uncomfortable. But in most cases, they’re also just plain ugly. Luckily, we’ve been reviewing camera straps for well over a decade. And we probably have the most reviewed of any credible publication. So we’re going to do a deep dive into camera straps and satiate your curiosity.

Why We Don’t Use Peak Design

First off, lots of folks use Peak Design. We stopped using them a long time ago for ethical reasons. If you’re not aware, they supported Unsplash many years ago, and they never wanted to make amends. I’m not sure what kind of company willingly sells out their audience and their backers. We’ve had correspondences with them about it, and they’ve just wanted to sweep it under the rug.

For the record, we hold many companies accountable for it. Polaroid is yet another. We’re even considering creating a master list of some sort about it.

You Really Should Use a Camera Strap

If you’ve ever seen photographers doing on-stage demos, lots don’t use camera straps. I can tell you from experience that this is a terrible move. We’ve been testing cameras and lenses for 12 years, and there have been accidents. I, too, have been on the receiving end of them. There’s nothing more gut-wrenching than watching a camera slip out of your hand, hit the concrete floor, and keep rolling. Camera straps are like seat belts. And it’s mandatory for our reviews team to use them.

Even if you’re the type to use an anchor of some sort or a tripod, you can never be too sure. Lots of folks complain that good camera straps are too expensive. But I can tell you from experience that they’re a lot less money than a repair, a rental, and the time you’ll spend waiting for the camera to come back from the shop. If you have insurance, the plan may not necessarily want to pay for the repair. This is especially the case if you happen to be off-site.

What a Good Camera Strap Should Have

The best camera straps are made of either one or a few key pieces of material:

More than that, there are also vital parts that a good camera strap should have. And for that, we’re taking inspiration from camera bags. As you probably know, we’ve also done original reviews of the most camera bags on the market. And I think we need to look at what messenger bags do here. They make the most sense of the bunch.

Here are some of the straps we use often. For the record, we only ever recommend products that we’ve reviewed and tested. All of these images are original product photos done by the staff. And our reviews are linked accordingly for you to check out. Before you make a purchase, I strongly suggest you check out our reviews and see if these really are for you. If you’ve got questions, shoot me an email at chrisgampat[at]thephoblographer[dot]com.

The Jolie Laide Traveler straps are often permanently fixed to our Canon Rf camera bodies in the house. They’re incredibly comfortable and have a lot of webbing. So when I use the Canon EOs R5 with a 100-500mm lens, it feels super comfortable. I’ll admit that there are times when I’m kind of cautious. But that’s more of my own personal paranoia than anything else. I’ve been using them for years now.

Best of all, these straps are pretty cheap too. If that’s your concern, go grab one of these.

Vi Vante is a newer brand that’s made here in America. Their creator, Scott, also does a fantastic job with them. Three of our favorites are:

Vi Vante is so good that I’d gladly buy them for the entire staff as standard straps.

Cosyspeed is incredibly ethical about lots of how their products are made. And even though they’re not always a hit with us, their recent stuff has become excellent. A case in point is the Quick Sally strap. Of any wrist strap I’ve used, this is probably the best. It’s comfortable, surprisingly strong, and it tightens comfortably around your wrist. There are times I’ve mounted it to a camera where I thought it would break. But that hasn’t been the case. It’s a bit perplexing to me, but I don’t question something that works.

TAP and DYE straps are made right here in NYC, and I’ve seen this company grow and evolve a lot over the years. Their greatest straps are made with leather and have great additions to them too. Some of them are coated in beeswax to make them durable and weatherproof. They’ve also got great hardware to attach to your camera. Other straps are soft and pliable, like their Horween Chromexcel straps. Of any camera straps on this list, Tap and Dye probably age the best.

Two of our favorites are their Legacy Neckstrap and their Horween Chromexcel strap. The latter might be one of the best camera straps on the market.

Hawkesmille straps are made in Europe, and they’re incredibly well done. They make very high-end, pricey camera bags that have always been frustrating. But their camera straps are some of the best coming out of Europe. They use strong materials that have lasted on our cameras for years. You can’t really go wrong with these at all. Buy it once, and it’ll last you an incredibly long time.

Holdfast Gear has been around for a very long time, and it’s been wonderful to see how Joanna and Matt have grown the company over the years. Holdfast makes two specific straps that are incredibly well done: